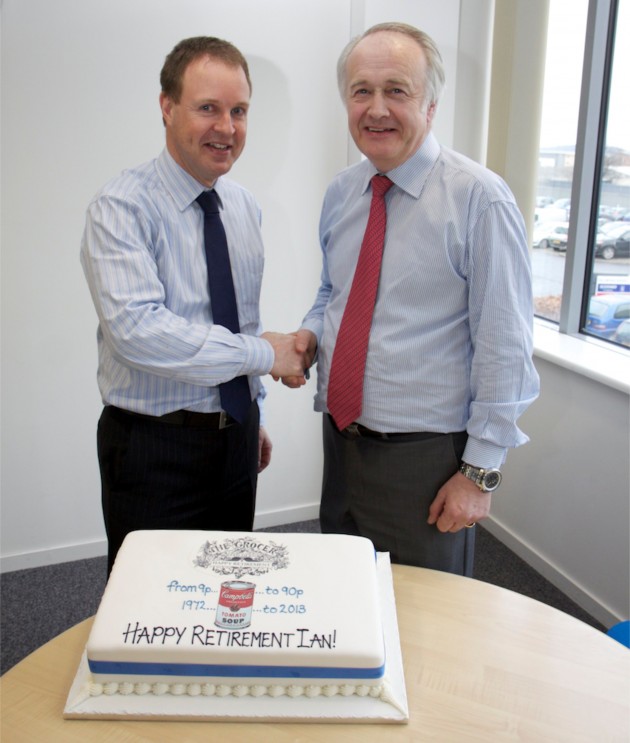 Scotmid Co-operative has said farewell to Ian Glen, Operations Director, who has retired after a 40 year career in retail – the last seven of which he spent working with the Society.

During his time with Scotmid, Ian oversaw an extensive programme of store refits and the successful integration of the Botterills convenience stores. Ian spent 33 years of his career with Safeway, working his way up from trainee manager to field management, where he was heavily involved in the Presto store conversions.

Born and raised in Ayrshire, Ian’s career with Safeway began in 1972, when he joined the A level management trainee program at the Prestwick store. After management roles in the Ayr and Shawlands stores – where he oversaw the first of many successful refits – Ian was appointed store manager of the Clydebank superstore. Back then, Safeway only had eight stores in Scotland and was still a relatively small part of the UK operation.

“Clydebank was the first superstore in Scotland and the largest Safeway in the UK”, Ian says. “It opened at the perfect time, just before the enormous growth of superstores started in the UK.”

Ian’s first foray into supermarket integrations was in 1987, when Safeway UK was sold to Argyll Foods, owners of Presto supermarkets, after a hostile takeover situation in the US caused the breakup of the brand around the world. Because the Safeway brand was stronger than Presto, Argyll decided to convert the larger Presto stores to Safeway. Ian was involved in planning the first trial in Scotland, in the Giffnock area of Glasgow.

“It was the first Scottish trial to see how the Presto conversion to the Safeway brand would work.. The sales doubled after the trial, so there was no question that the store conversions were the right strategy and plans were created to continue converting the larger stores in Scotland to Safeway.”After the Giffnock store opened, Ian was asked to take up a role as a district manager in the South of England, where he was tasked with replicating his success in three other regions.

“I spent 22 months living in hotels in Southern England, converting and integrating Presto stores into Safeway.” Ian says. “From Devon to the Midlands, we added value to the stores all over the region and achieved double digit growth.”

Ian returned to Scotland to continue the conversions in the West. Later on, Argyll Foods decided to start converting the smaller Presto stores to Safeway, which took Ian all over the North of Scotland, where he travelled as far as the Isle of Skye, Shetland and Orkney. Ian also spent a lot of time coaching and mentoring the Presto staff to integrate them into the Safeway business.

“Integrating businesses is by no means an easy task, but the hardest part of all is definitely integrating the people”, Ian says. “You need to take time to understand and mentor the staff to get them to go with you and you need to involve them as much as you can.”

A subsequent restructure of Safeway split the business into superstores and supermarkets, and the company’s operations were moved to its Head Office in Middlesex. During this period, Ian looked after 118 stores in Scotland and the North of England, followed by a role overseeing the operations for a number of superstores. In 2002, Ian relocated to Northern Ireland to take up a new endeavour as the Operations Director for the region.

The following year brought the end of the Safeway brand in the UK when Morrison’s bought the supermarket chain, and Ian was given a new challenge.

“A great deal of work was put in to the Safeway business in Northern Ireland to make it much more profitable. Morrison’s had decided to sell on the Northern Ireland stores, which eventually went to ASDA, so my last job there was to get the stores ready to be handed over one by one.”

After completing his assignment in Northern Ireland, Ian returned home to Scotland and enjoyed his first ever Christmas off. He decided to leave the Morrisons business and embark on a new challenge. A few months later, Ian was approached by Scotmid’s Chief Operating Officer, Colin McLean, to work on an interim basis. That initial 4-12 week position turned into nearly seven years with the Society, where Ian put his extensive experience in store integrations, mentoring and refits to good use. Ian worked as part of a team to support the modernisation of the Scotmid brand, operations and systems, overseeing over 100 store refits in three years. In 2011, When Scotmid acquired Botterills convenience stores, Ian led the team in operations to integrate nearly 50 stores into the estate, completing it on time and under budget.

“Working with Scotmid was one of the highlights of my career”, Ian says. “To be able to add growth and value and the see the end result of many refits and the results from the Botterills store conversions meant that I got to retire on a high. Scotmid is full of people who believe in what they’re doing and the business has stayed strong in tough financial times. It’s a company that has both its head and its heart in the right place.”

Colin McLean, Scotmid’s Chief Operating Officer says: “Ian made a great contribution to the overall business and he played a key part in the turnaround of the Society, both for Scotmid Food and Semichem. Ian was fundamental to the success of the Botterills acquisition and he has left an excellent legacy for our business. We wish him well in his retirement.”

Ian is planning to spend his retirement improving his clay pigeon shooting and doing more travelling, but he hasn’t ruled out a move into consultancy work down the line.

“I’m going to take life as it comes,” he says. “What I’ve learnt most from my career is that you’re only as good as the people around you. You have a responsibility to develop, coach and mentor the people you work with. If you’re willing to take the time to do it, then they will exceed your expectations and you’ll be surrounded by people who you can depend on.  This means that when you eventually retire, like me, there will be a positive legacy left behind you.”