Scroll through our History

From St Cuthbert’s to Scotmid 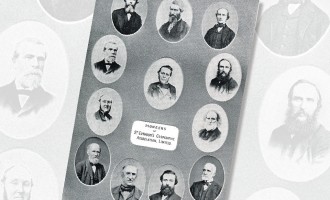 The history of Scotmid Co-operative spans over 150 years. It began in a house in Grove Street, Edinburgh, in July 1859 where 12 men met with the purpose of forming a co-operative society, a practice which was becoming increasingly popular with poor choice and high prices common when dealing with the merchants of the day.

The early years of St Cuthbert’s 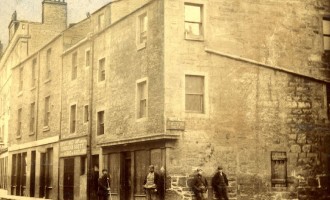 The first few years were difficult for the St Cuthbert’s Co-operative Association.  Members of the co-operative did not give their full support to their own shop and shopped elsewhere. With reduced sales, increased debt and a vanishing capital, the end of the Association seemed inevitable.

However, through the optimism and determination of the committee, who visited every member to convey the need to give their business to their own store, profits increased and by 1864 the future was looking bright for St Cuthbert’s. 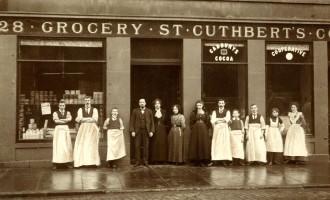 1864 was a landmark year for St Cuthbert’s, when married women were permitted to join as members. St Cuthbert’s was starting to thrive, with 275 members, quarterly sales of over £1,500 and a profit from the previous three-month period of £110. The co-operative began to expand, opening a new store and bakery on Morrison Street in 1865, followed by two new stores in Dalry and Adam Street in 1877. 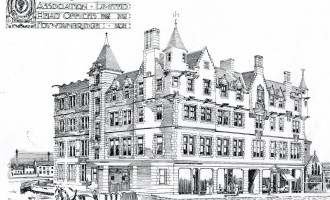 By December 1880, with rising membership and increasing trade, St Cuthbert’s had outgrown its Fountainbridge premises so a large piece of land was purchased nearby to build new premises. As well as a new shop, the building would accommodate stabling and baking.

The Fountainbridge building was the headquarters of St Cuthbert’s – and later Scotmid – until 2005. In 1883, the ‘Women’s League for the Spread of Co-operation’, later renamed ‘The Co-operative Women’s Guild’, was established. St Cuthbert’s had nine stores by 1886. 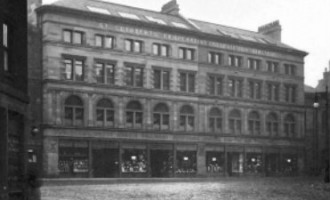 St Cuthbert’s enjoyed a period of significant expansion from 1886-1899. 20 new stores were opened and the co-operative began to expand into new areas of business by opening a new drapery store on Bread Street, a butcher’s shop in Fountainbridge and a coal department. The expansion continued, with the opening of three more drapery stores and new crockery and pharmacy departments. St Cuthbert’s also started selling furniture. 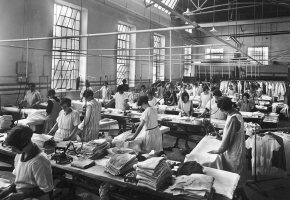 From 1900 to 1915, St Cuthbert’s grew even further after it amalgamated with other co-operative societies, including the Northern District, Norton Park, Bonnyrigg and Juniper Green Societies. By 1909, 50 years after it was founded, St Cuthbert’s had become the largest co-operative in Scotland and had the highest sales of any co-op in the UK, paying out over £3.6 million in dividends to its members. During this time the Association’s expansion continued, first with the start of laundry service in 1912, followed by the purchase of the 1,000 acre Cliftonhall Estate to start a farming operation in 1913.

The most successful Society in Britain 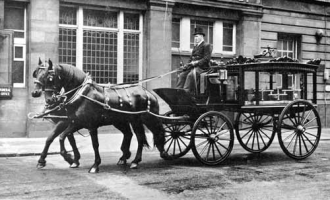 By 1923, St Cuthbert’s still had the highest annual sales of Britain’s co-ops  – even thought it was only the fifth largest in terms of members. This was also the year that women were admitted to the Board of Management. St Cuthbert’s opened an almost fully automatic bakery in Port Hamilton in 1925, followed by a dairy next door in 1927. The dairy had equipment for the pasteurisation of milk, a practice pioneered by co-op societies in Scotland, and by 1959 was producing 12,000 gallons of milk a day. St Cuthbert’s started its first funeral operation in 1927. 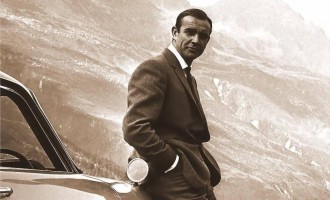 In 1944, at the age of 13, none other than Sir Sean Connery – then Thomas Sean Connery – started work as a barrow worker in the St Cuthbert’s dairy, at a wage of 21 shillings a week. In 1948, Sir Sean left the Association temporarily for his National Service, making a brief return as a milk horseman until 1950 when his acting career beckoned. St Cuthbert’s was now the largest farming operation in Scotland and the largest cattle feeders in the UK. Recognised for its sheer size and example, St Cuthbert’s had the power to regulate prices in Edinburgh. In 1942, St Cuthbert’s had its first female president, Margaret Bain. 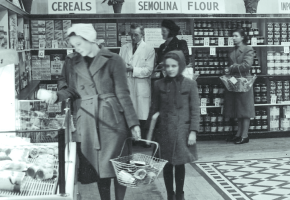 In 1949, St Cuthbert’s was among the pioneers of self-service shopping in Scotland, experimenting first of all in the Dundee Street branch and, soon after, converting the Picardy Street branch to this increasing modern and popular way of shopping. In 1946, £10,000 was granted for the purchase of premises for welfare and education facilities for Association employees. Welfare House in Polwarth Terrace opened towards the end of 1950 as a memorial to Association employees who lost their lives in World War Two. 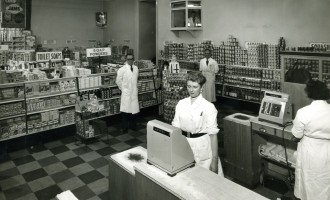 St Cuthbert’s celebrated its centenary in 1959 – the same year as it opened Scotland’s first supermarket on Leven Street, Tollcross, just around the corner from the original St Cuthbert’s store. In 1965, the Association’s transport department received the prestigious Royal Warrant for Coach Painting.

The following year the Queen and the Duke of Edinburgh visited St Cuthbert’s transport department and the Queen was presented with a four-wheeled game wagonetta for use at Balmoral. St Cuthbert’s had become the only co-op in Edinburgh by 1966, after amalgamating with the Hillwood, Portobello, Gorebridge, Crofthead and Leith Provident Societies

A new Society and a new name 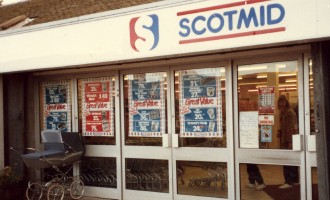 St Cuthbert’s became known as Scotmid in 1981, after merging with the Dalziel Society of Motherwell. The name was changed to reflect the larger geographic area that was covered by the new Society, from the St Cuthbert’s Co-operative Association of Edinburgh to the Scottish Midlands Co-operative Society (the full name for ‘Scotmid’). It was because of this merger that many other co-operative societies throughout Scotland flocked to join forces with Scotmid. These included the Carluke & Law, West Lothian and Bo’ness Societies. 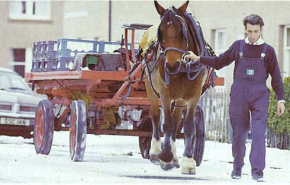 In 1985, Scotmid made the last horse-drawn milk deliveries in the UK. Scotmid’s horses had been pulling milk carts over Edinburgh for over 100 years. They were more economical than motor vehicles and more reliable, especially in the winter months, but with the rising popularity of buying milk in cartons from supermarkets, it was time for the end of an era. The same year saw Scotmid stores introduce automatic till scanners, barcodes and printed till receipts. Scotmid continued to expand, amalgamating with Penicuik, Uddingston and Prestonpans co-operative societies. 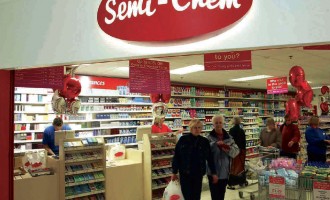 Scotmid acquired Semichem in 1995. A dedicated stream of investment and marketing saw the chain flourish and expand rapidly and, by 1999, Semichem was operating 80 health and beauty stores, followed by another 27 in Northern Ireland after the Northern Irish Options chain was purchased.

In 1999, the Society expanded its funeral services with the purchase of the Broxburn firm of Thomas Brown. Scotmid closed its non-food department outlets by 2000, marking the beginning of the modernisation of the organisation. The Society continued to grow through amalgamations with other co-operative societies in Scotland, including Bonnybridge, North Tayside and Strathaven Societies. 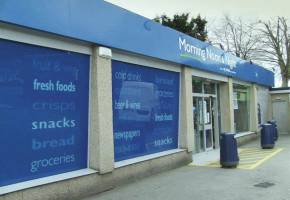 During 2003 and 2004, Scotmid underwent a rapid period of growth, purchasing eight stores from the Co-operative Group and nine Spar stores in Edinburgh, the Lothians and Fife. In 2004, Scotmid acquired Dundee-based convenience store chain, Morning Noon & Night in a move that was described at the time as “one of the most significant retail deals in Scotland”. This increased Scotmid’s stores to 120, widening the geographical spread and taking the total workforce to over 4,000. The same year, Scotmid bought the Motherwell funeral firm, Dundas Fyfe. 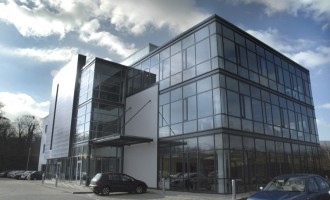 After being based at Fountainbridge for 125 years, Scotmid moved to a purpose-built head office in Newbridge in 2005. Scotmid began to restructure the business after making a loss following the acquisitions, returning to profit in 2009 and winning the prestigious Scottish Grocer’s Social Responsibility Award in 2008 and 2009. In 2009, Scotmid celebrated its 150th birthday. The Society was honoured to receive a civic reception at the City Chambers from the Lord Provost of Edinburgh in recognition of its 150 years of co-operation in Edinburgh. 2009 was also the year that ‘The Academy’ opened at Newbridge, an award winning training facility to develop staff. The same year, Scotmid’s members agreed to a constitutional review to modernise the governance structure, creating new regional committees for the East and West of Scotland. 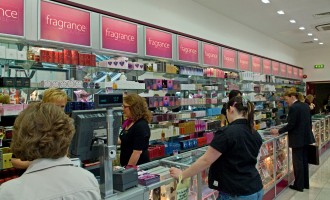 Scotmid acquired the Botterills Convenience Stores chain in 2010, bringing the number of convenience stores owned by Scotmid to 190. Another landmark achievement that year was the start of The Fragrance House, a pilot business venture selling prestige and premium fragrances, with trial stores in Dundee, Livingston, Greenock, Glasgow and Aberdeen. The pilot venture ended in 2015. 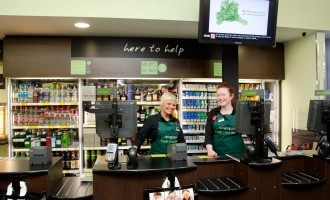 Scotmid opened its first premium convenience store in Warrender Park, Edinburgh, in 2012, marking the start of an important new chapter in its history. The new store format has a larger range of fresh fruit and vegetables, artisan bread, speciality wines and craft beer, an expanded meat and fish section, and new customer services including in-store bakeries, Costa Express, freshly squeezed orange juice. Scotmid Warrender Park won the best multiple store in the UK in 2013 by the Convenience Retailing Awards and the store’s format has been so successful that a further six stores have now been revamped in Edinburgh, Glasgow, Fife and Aberdeenshire. 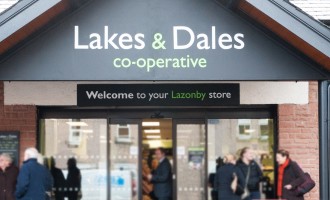 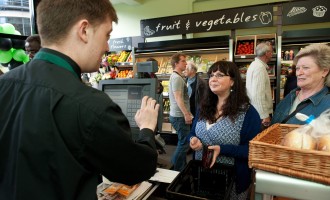 Today, Scotmid is Scotland’s largest independent co-operative, with 350 retail outlets in Scotland, Northern Ireland and the North of England. We have 5,000 staff across Scotmid, Semichem, Lakes & Dales co-operative, funeral branches, post offices and our property department. We are still a co-operative society and we are still owned by our members, who each have an equal say in how we are run. We are true to our co-operative values and principles we are committed to supporting our local communities.