Zoo is flying high with donation from Scotmid 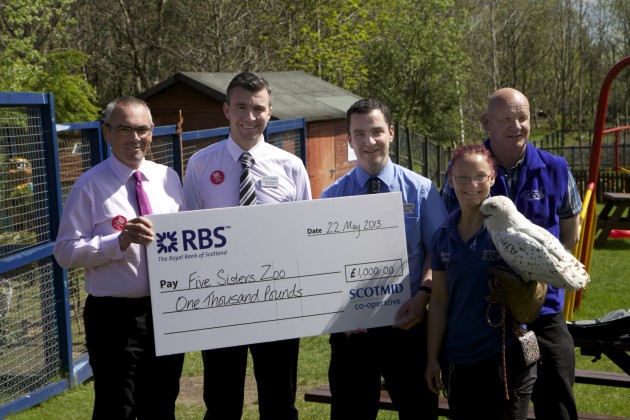 A West Lothian Zoo that was devastated by fire in April has received a £1,000 donation from Scotmid stores in the local area.

Scotmid’s donation to the zoo was raised by selling two pence plastic carrier bags in local stores, with 100% of the profit pledged to charities.

The zoo’s reptile tropical house and several buildings were destroyed by fire on 14 April this year, which killed 48 different species including reptiles, small mammals and invertebrates. The local community has now raised over £55,000 to help Five Sisters Zoo to rebuild.

“We sell plastic carrier bags in our stores for two pence each, and the profit goes to local charities, so it’s a win-win for both the charities and the environment. We chose to support the Five Sisters Zoo because it’s loved by the local community and the fire fund is a terrific cause. We have quite a few stores in the area and we’re really happy that we’ve been able to help.”

Lesley Coupar, Marketing and Visitor Services at the zoo said:

“Scotmid’s donation is another step closer to the rebuilding of the zoo and another community gesture that’s given us hope. After the fire happened we just couldn’t see forward. After all our hard work with the zoo, to see it destroyed was devastating. The support to come out of this tragedy has been such a source of comfort, it’s been amazing and we’re very overwhelmed. The new Five Sisters Zoo will be a fitting tribute to the animals we lost and the community spirit that has been shown to us.”