Giant pumpkins cause a stir in Scotmid for Halloween charity competition 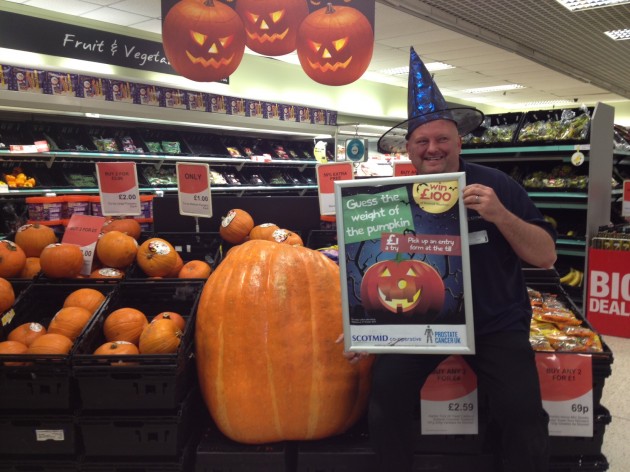 Team member Phil Henderson with the pumpkin at Scotmid Portobello.

"Have a punt at the poundage of the pumpkins, with a chance to win a great prize and raise money to fight the most common cancer in men."

Two giant pumpkins have taken up residence in Scotmid’s Portobello and Uddingston stores, as part of a Halloween ‘guess the weight’ competition. The competition will raise funds for Prostate Cancer UK and gives customers the chance to win a £100 shopping voucher.

Each guess costs £1 and 100% of the proceeds will be donated to the charity. The entry that is closest to the weight of the pumpkin will win the gift voucher and will be announced on 31 October.

Graham Philip, Store Manager of Scotmid Portobello said: “The pumpkin is causing quite a stir in the store with countless people getting their photograph taken standing next to it, and the kids are really enjoying seeing it. We hope that lots of people will take part and have a go at guessing the weight of the pumpkin. Not only will you have the chance to win a £100 voucher, but you will also be helping Prostate Cancer UK continue their vital work.”

Fiona Dunlop, Fundraising Manager for Prostate Cancer UK said: “This is another brilliant fundraising idea from our fantastic corporate partner, Scotmid. I would encourage all staff and customers to have a punt at the poundage of the pumpkins, with a chance to win a great prize and raise money to fight the most common cancer in men.  For what it’s worth, my feeling is that a guess of somewhere between 10 and 2000 pounds will be in with a shout.”

Prostate Cancer UK is Scotmid’s official charity partner for 2013/2014. Scotmid’s charity partnership scheme, which began in 2001, has raised more than £1 million for charities since its initiation, including The Princes Trust, RNLI and Marie Curie Cancer Care.