Scotmid sponsors Team Muirhead in their quest for Olympic glory 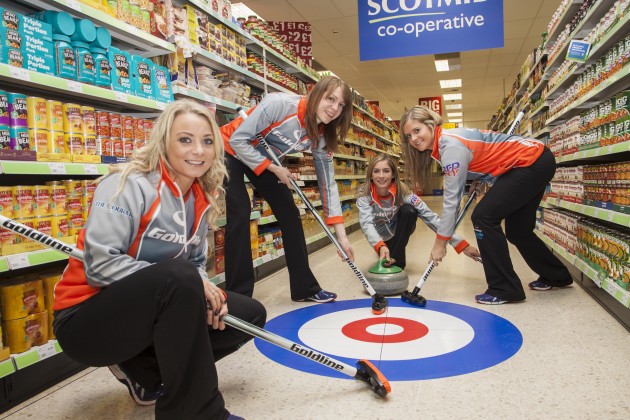 “Scotmid’s sponsorship of Team Muirhead has been fantastic. Their support over the last three years has helped us to get to the top of our game, and their increased sponsorship this year will help us to stay there."

Scotmid Co-operative has officially announced its increased sponsorship of Scottish and World curling champions Team Muirhead, as they prepare to go for gold in the 2014 Winter Olympics.

The support from Scotmid will help Eve Muirhead and her team of Claire Hamilton, Vicki Adams and Anna Sloan to focus on training for the Olympics full-time.

This is the third year that Scotmid has sponsored Team Muirhead, after first meeting the curlers in 2011 when Vicki Adams applied for a community grant. Scotmid has increased its support each year and is now one of the team’s main sponsors. Eve Muirhead said: “Scotmid’s sponsorship of Team Muirhead has been fantastic. Their support over the last three years has helped us to get to the top of our game, and their increased sponsorship this year will help us to stay there. Sponsorship will make a big difference to our preparation for the Olympics as it means we can focus on training full time. We are very grateful to have Scotmid behind us as we get ready for Sochi next year.”

Malcolm Brown, Head of Corporate Communications for Scotmid Co-operative said: “Team Muirhead is truly inspirational and they are excellent role models for young people in Scotland, and indeed, to all of us here at Scotmid. We are honoured to have been a part of their journey to the top over these last three years, and we are delighted to be increasing our sponsorship this year to help them prepare for Sochi 2014. The commitment and hard work that Eve, Claire, Vicki and Anna have shown to achieving their goals is to be admired by all and we wish them the best of luck in achieving the ultimate prize of Olympic Gold.” The team with their curling stone cake.

The team will be representing Team GB in the Winter Olympics in Sochi, Russia, in February 2014. Team Muirhead is skipped by Eve Muirhead, with Claire Hamilton as lead, Vicki Adams as second and Anna Sloan as third.