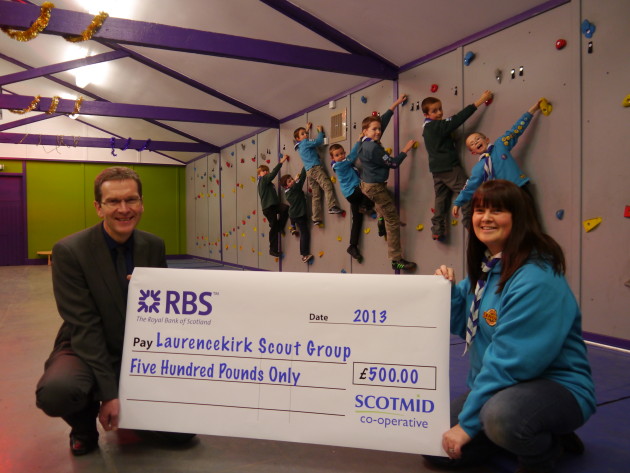 Laurencekirk Scout Group, the charity which manages the town’s Beaver, Cub and Scouts, has become a recipient of a Scotmid community grant.  The grant of £500, awarded by Scotmid’s North Regional Committee, has been used to install a climbing wall as part of the of the Group’s Scout Hut refurbishment.

Avril Nicoll, Chairperson of the group, made the grant application to Scotmid.  Avril said, “Over the past four years, we’ve raised an amazing sum of money, around £60,000 for the refurbishment which coupled with family, friends and the wider community donating their skills and time, has allowed us to refurbish much of the hall including the exterior, the wiring, heating and insulation.  The climbing wall was an added treat for the Beavers, Cubs and Scouts and has been a big hit!”

The refurbishment of the hut means that it will be deemed fit for purpose for a further twenty five years, having been in use by Laurencekirk Scouts since 1954.  The next stage will see the redevelopment of the kitchen and toilet facilities.

Scotmid’s North Regional Committee is made up of eight, elected Scotmid members.  The committee meets regularly to consider grant applications from community groups, charities and non-profit organisations from Perth to the Northern Isles.

North Committee Chair, John Anderson from Montrose commented, “It is heartening to see the difference that the collective effort of the Laurencekirk community has made to the Scout Hut and it’s a pleasure for Scotmid to be able to assist in some way with this huge undertaking.”