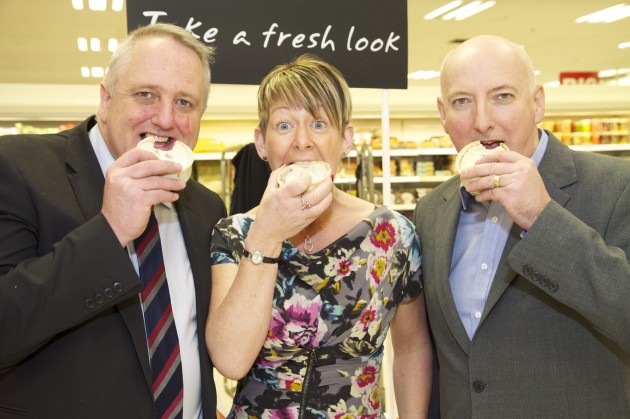 "The taste has been a revelation to a lot of people who thought they would never eat a scotch pie again!”

A low fat scotch pie that has been endorsed by Scottish Slimmers has been officially launched today at Scotmid Co-operative stores across Scotland.

The McGhee’s reduced fat scotch pie, produced by McGhee’s Bakery of Glasgow, has nearly half the fat of a standard scotch pie. The pie is also lower in salt and is now within the government’s healthy eating guidelines for salt content.

The McGhee’s production team has worked hard to ensure that the reduced fat scotch pie looks and tastes just as good as the traditional version. The pie’s healthier credentials have earned the product a ‘Health Checked’ stamp of approval from Scotland’s weight loss experts Scottish Slimmers, whose members taste tested the pies during their development. The healthier scotch pie is approved by Scottish Slimmers.

Ross Hamilton from McGhee’s Bakery said: “We wanted to create a scotch pie that was healthier, without compromising on the taste. We trialled the low fat pie and we were astounded at how well it was received. By reducing the fat content by such a big margin we had to reduce the seasoning, and this brought down the salt levels so they are now within the government’s healthy eating guidelines. The fat is reduced by over 40 per cent compared to a traditional scotch pie recipe, and the taste has been a revelation to a lot of people who thought they would never eat a scotch pie again!”

Jennifer Polson from Scottish Slimmers said: “Scottish Slimmers members are always interested in eating healthier versions of their favourite foods and the McGhee’s reduced fat scotch pies proved an instant hit with those who tested them. 46% of our members told us they had decided to stop eating scotch pies altogether while they were losing weight so, now, thanks to these lighter, tastier pies they can enjoy a Scottish Slimmers style scotch pie supper with the rest of their family any time – and still get a weight loss!”.

Stephen Brown from Scotmid Co-operative said: “McGhee’s reduced fat scotch pie is a great new product and we are delighted to be launching it in our stores across Scotland. We’ve all been quite surprised at how delicious the pie is and we’re looking forward to finding out what our customers think of it too.”

McGhee’s is one of Scotmid’s local suppliers. Scotmid is committed to supporting Scottish businesses in the food and drink sector.