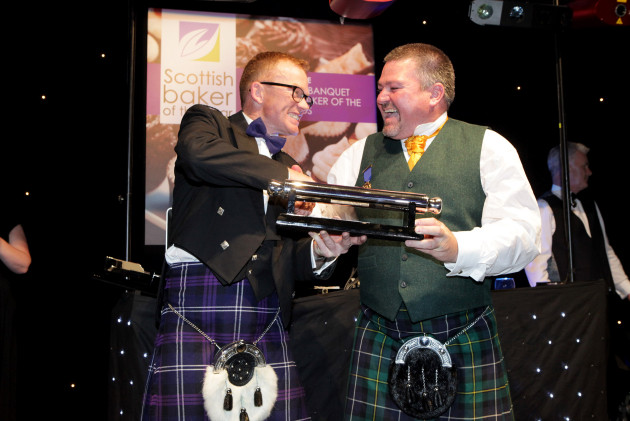 George and Alister Asher from Ashers of Nairn.

"Ashers are not only experts at baking delicious bread, cakes and savouries, but they are also creative and innovative, and have been fantastic at developing new products exclusively for our customers."

Scotmid is delighted to congratulate its local bakery partner, Ashers of Nairn, after being crowned the Scottish Baker of the Year 2014 at a special awards ceremony in Glasgow on 19th May 2014. The family-owned Nairn bakery impressed the judges with their savoury bakery products and whisky cakes.

Ashers has in-store bakeries in 12 Scotmid stores across Inverness-shire and Nairnshire, supplying customers with rolls, pies, bridies, cakes and sweet treats every day. Ashers recently helped Scotmid celebrate the opening of its 100th in-store bakery in Scotmid Balloan in Inverness. JG Ross, another of Scotmid’s local bakery partners, was also recognised at the award ceremony.

Stephen Brown, Bakery and Local Sourcing Manager for Scotmid said:  “We are delighted that Ashers of Nairn has been named the best bakery in Scotland for 2014 and we’d like to congratulate Alister, George and the team for their much deserved win. We are proud to be working in partnership with the team, and to have Ashers in-store bakeries in 12 of our stores. Ashers are not only experts at baking delicious bread, cakes and savouries, but they are also creative and innovative, and have been fantastic at developing new products exclusively for our customers.”

Alister Asher, Joint Managing Director for Ashers said: “I’m absolutely delighted that Ashers has won the 2014 Scottish Baker of the Year. It’s been an exceptionally busy year due in no small part to the Scotmid partnership. It’s also an honour to follow on from Stephens who flew the flag for Scottish baking extremely well. We’re looking forward to continuing our franchise rollout bringing freshly baked, award-winning products to Scotmid customers throughout the Moray Firth area.”

The win by Ashers is the second year that one of Scotmid’s bakery partners has scooped the title of Scottish Baker of the Year, after Stephens Bakery of Dunfermline won the award in 2013.

Scotmid has been undertaking a major project to install bakeries into its stores across Scotland and Cumbria, in a drive to support more local bakers and provide an improved range of bakery products for customers.

100 stores have now been fitted with bakery counters with help from a local bakery partner, offering cakes, savouries and baked goods, while other stores now stock locally-made, artisan breads. Store staff have also received special training from the bakers as part of the partnership.

Scottish Baker of the Year is a competition where all customers across Scotland can vote for their favourite local baker and to rate his/her products in the following categories: morning roll, scone, individual cake, savoury, bread and biscuit scoring each on appearance/ freshness, taste and value for money