Craigroyston club kitted out in style thanks to Scotmid donation 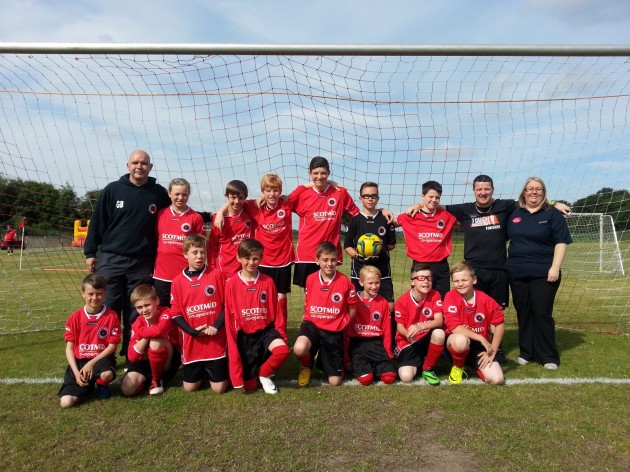 The team show off their new football strips.

"The grant has really come in handy – if it wasn’t for Scotmid we wouldn’t be able to get these strips or equipment."

Craigroyston’s under 12s football team has been kitted out in style with new football strips, thanks to a community grant from Scotmid Co-operative. The £500 grant was awarded by Scotmid’s East Regional Committee and will also help the club to buy new equipment including kit bags, footballs, nets and water bottles.

Craigroyston Community Youth Football Club competes against teams in the East of Scotland league and was founded in 2007.

Graeme Bell, who coaches the Under 12s team, made the community grant application to Scotmid. He said: “We believe that playing football not only keeps kids fit and healthy, but that it also keeps them off the streets, and it teaches them discipline and teamwork. In other words, what we do is not just about football – it’s about building important life skills too.”

He added: “We are very grateful for Scotmid’s donation, as our only source of income is from club fees. The grant has really come in handy – if it wasn’t for Scotmid we wouldn’t be able to get these strips or equipment. The new kit is going to make our team look like the young football stars that they are. We’re a friendly local club and we’d encourage people to come along and join us.”

Craigroyston recently held a fun day to encourage kids from the local community to get involved with the club. Tricia Edington, Scotmid’s Membership and Community manager, and Michelle Hunter who works at Scotmid’s Crewe Road store and is a parent of one of the players, went along to join in the fun.

Tricia said: “Our community grant scheme is one of the ways that we give back to our local communities. Craigroyston is a fantastic and friendly football club who are an important part of their local area. It is a pleasure for Scotmid to help them purchase their new football strips and equipment, and we hope that it will give the Under 12s team the winning edge in their upcoming matches.”