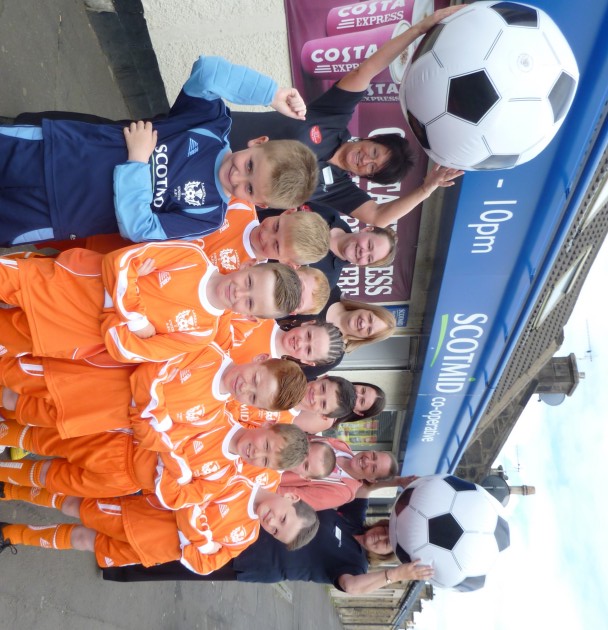 "Without this support from Scotmid we would still be trying to raise money for new strips and we wouldn't have had any new training equipment to develop their skills."

Larkhall’s budding football stars have scored new strips to give them the winning edge in their matches, thanks to a donation from Scotmid Co-operative. Scotmid awarded £369 to Larkhall United’s 2005 football team as part of its community grant scheme.

Larkhall United AFC is a community based football club and encourages boys and girls to join from the age of six. The club plans to use Scotmid’s grant for a new kit and training equipment, including training hurdles and ladders.

Lynn Paterson from Larkhall United made the community grant application to Scotmid. She said: “The football strips that the kids used to have were ripped and far too small for them. When a team turns up for a game, it’s important that they are well-dressed and look like a team. Not only does it make a good first impression, but it also encourages more children to join, which means that more kids in our local community are getting exercise and developing their social skills. Without this support from Scotmid we would still be trying to raise money for new strips and we wouldn’t have had any new training equipment to develop their skills. We are extremely grateful for everything that Scotmid has done for our club.”

Yvonne Goodfellow, Membership and Community Officer for Scotmid Co-operative said: “Our community grant scheme is one of the ways that we give back to our local communities. Larkhall United is a wonderful local football club who are an important part of their local area. We are delighted to be able to help them buy new football strips and equipment, so they can look the part in their matches and develop their skills too.