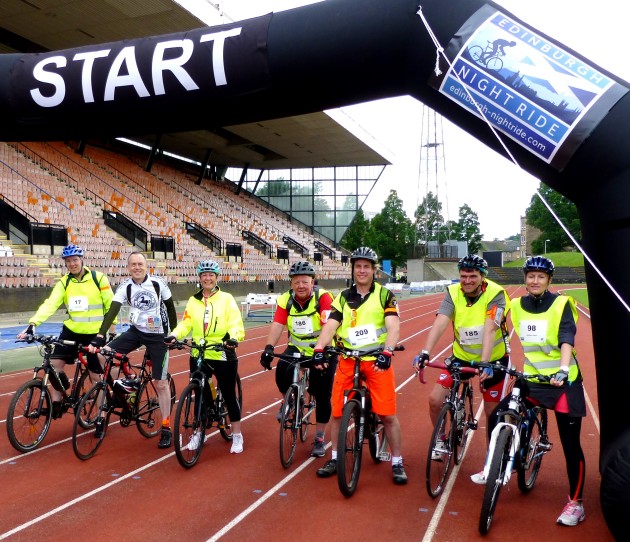 A team of six from Scotmid Co-operative have helped make a difference in the fight against prostate cancer, after taking on the Edinburgh Night Ride on 21 June 2014. The cyclists have raised almost £4,200 so far for Prostate Cancer UK, Scotmid’s official charity of the year.

The Scotmid team set off at 8.30pm and cycled 50 miles through the night as they took in the iconic sights of Edinburgh, including the Royal Mile, Edinburgh Castle, Arthur’s Seat, Princes Street and the Royal Observatory.

The event was extra special for team member James Blackburn, Head of Scotmid Funerals, who celebrated his 50th birthday on the night of the cycle. James Blackburn celebrated his 50th birthday during the cycle.

James Blackburn said: “The Edinburgh Night Ride was a fantastic event and a great achievement for everyone in Team Scotmid. We completed the 50 miles in just under five hours and crossed the finish line at 2am. It was my 50th birthday on the 21st so I had a 50th birthday helium balloon tied to my bike for all 50 miles, although I’m not sure if that helped or hindered my performance!”

He added: “I’m very proud of the team for raising so much for Prostate Cancer UK. Prostate cancer is the most common cancer in men and Prostate Cancer UK works very hard to help more men survive it and enjoy a better quality of life.”

Team Scotmid was made up of John Brodie, James Blackburn, Christine Chitty, Justyna Jelen, Gavin Sinclair and Gavin Vickery. Prostate Cancer UK is Scotmid’s charity partner for 2013/2014. Scotmid has raised over £220,000 so far for the charity so far, with two months still to go in their partnership.

Staff have taken part in a number of inspiring fundraising challenges including zipsliding across the River Clyde and cycling from Glasgow to Edinburgh, amongst other fitness challenges. Furthermore Karen Grant – Branch Supervisor at Scotmid’s Bishopmills store in Elgin – shaved her head in support of the partnership in October, while over 70 staff grew moustaches as part of the Movember campaign, which provides funds to Prostate Cancer UK. Scotmid has also held a national talent contest for staff, raising nearly £40,000.

Scotmid’s charity partnership scheme, which began in 2001, has raised more than £1 million for charities since its initiation, including Maggie’s, The Princes Trust, RNLI and Marie Curie Cancer Care.