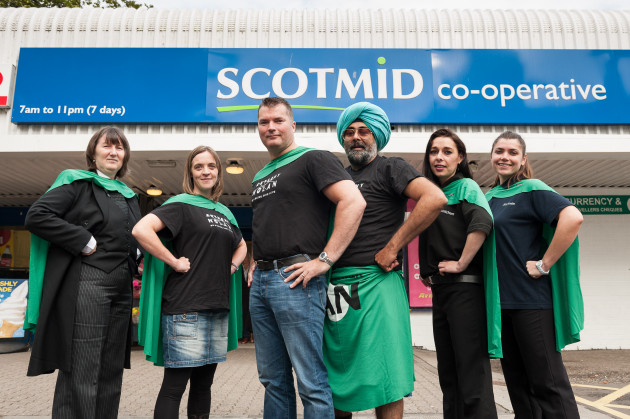 The Scotmid Lifesavers with Hardeep Singh Kohli and Ally Boyle

"The money Scotmid raises for us this year will help us save lives by adding 2,000 new potential donors to our bone marrow register from Scotmid’s retail areas." Nearly 5,000 staff members from more than 350 stores have turned into ‘The Scotmid Lifesavers’ for the year, teaming up with their communities to raise a target of £200,000 for Anthony Nolan.   The partnership between the organisations will be a lifesaving match for people with blood cancer, helping Anthony Nolan to find matching donors for those who desperately need a bone marrow transplant.

The partnership launched in Edinburgh with an event at the city’s Portobello Scotmid store on Monday. Representatives from the Society and Anthony Nolan were present and store employees dressed up in ‘The Scotmid Lifesavers’ capes to pledge their support for the lifesaving partnership.

The retired firefighter will eventually need a bone marrow transplant because his condition means he doesn’t have enough healthy white blood cells.

He said: “I am delighted that Scotmid is supporting Anthony Nolan this year. It is a fantastic charity that offers a life-line to ordinary people like me. I used to fight fires for a living but to me, the people who keep Anthony Nolan going by raising money and awareness are everyday heroes.” Hardeep Singh Kohli added: “As an Anthony Nolan supporter and a Scotmid customer I am keen to support this partnership. Bizarrely, when the team at Anthony Nolan called me to ask me to get involved, I was actually doing some shopping in Scotmid! I am sure this partnership will prove to make a life-changing difference for people with blood cancer, and I am glad Scotmid is supporting such a worthwhile cause.” Throughout the next year Scotmid Co-operative stores will also hold a range of events to raise money and awareness for Anthony Nolan. Catherine Miles, Director of Fundraising at Anthony Nolan, said: “The money Scotmid raises for us this year will help us save lives by adding 2,000 new potential donors to our bone marrow register from Scotmid’s retail areas – Scotland, North of England and Northern Ireland.

“These will be 2,000 people who could be the only lifesaving match for someone with blood cancer – someone who would otherwise have no other chance to live.” Malcolm Brown, Head of Corporate Communications for Scotmid Co-operative added: “We are thrilled to be working alongside Anthony Nolan in the year they celebrate four decades of saving lives.

“Anthony Nolan’s vital work to find matching donors for people with blood cancer is already resonating with our staff and customers. Our partnership isn’t just about raising money – it’s also about raising awareness.

“We’re sure that ‘The Scotmid Lifesavers’ can help Anthony Nolan to grow its lifesaving register and carry out world-class research into blood cancer at a crucial time in the charity’s history. This is set to be another exceptional charity partner for the Scotmid family.”