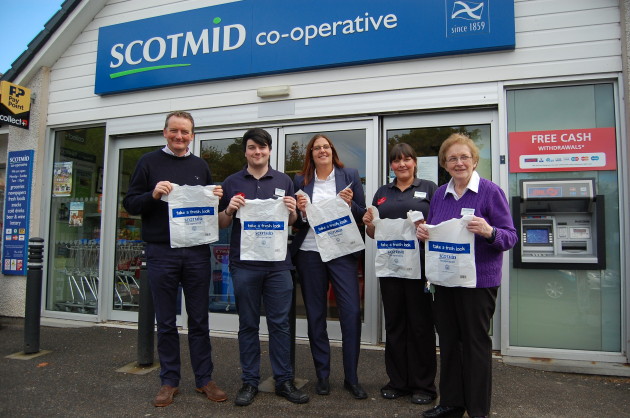 “Scotmid has been an active supporter of reducing plastic carrier bag use for many years and our customers have really embraced the change."

Scotmid Co-operative has introduced the Scottish Government’s new 5p charges for plastic carrier bags in all of its stores across Scotland, with 100 per cent of the profit pledged to charity partner Anthony Nolan.

The retailer has been an active supporter of reducing plastic bag use since 2011, previously charging two pence for carrier bags.

This initiative has raised over £110,500 for local causes – from primary schools, to sporting clubs, to environmental charities. Recent beneficiaries have included the RSPB in Inverness, Scottish Veteran Fencing in South Queensferry, and Dalserf Bowling club in Larkhall.

Scotmid will now be putting the profits from the sale of carrier bags towards its charity of the year to help people with blood cancer find their lifesaving match for a bone marrow transplant.

Malcolm Brown, Head of Corporate Communications for Scotmid Co-operative said: “Scotmid has been an active supporter of reducing plastic carrier bag use for many years and our customers have really embraced the change. We’ve been charging two pence for carrier bags since 2011, which not only helps the environment, but has also enabled us to raise over £110,500 for local good causes.”

Malcolm added: “We were delighted to sign up to the Carrier Bag Commitment from Zero Waste Scotland and we’re pledging to donate the profits from the sale of carrier bags to our charity partner Anthony Nolan.”

As part of Scotmid’s charity partnership with Anthony Nolan, nearly 5,000 staff members from more than 350 stores have turned into ‘The Scotmid Lifesavers’ for the year, teaming up with their communities to raise a target of £200,000. The partnership between the organisations will be a lifesaving match for people with blood cancer, helping Anthony Nolan to find matching donors for those who desperately need a bone marrow transplant.