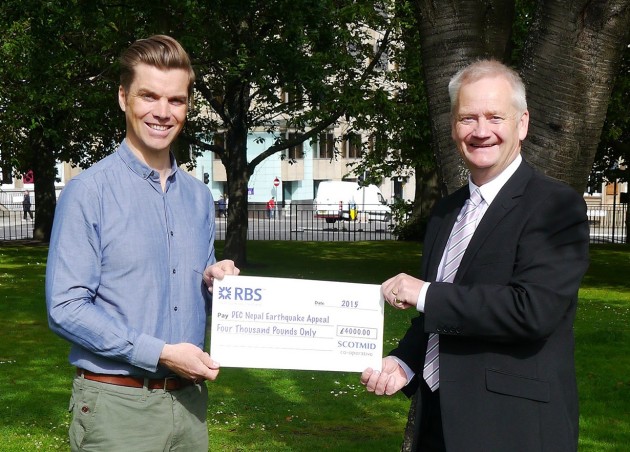 Scotmid has donated £4000 to the Disasters Emergency Committee (DEC) Nepal Earthquake Appeal to support those left injured or homeless by the major earthquakes in Nepal in April this year.

Ten staff from Scotmid skied 8,848 metres, the equivalent height of Mt Everest, at Snow Factor in Braehead, to raise funds for blood cancer charity Anthony Nolan. Scotmid pledged to match all funds raised, to be donated to the DEC Nepal Earthquake Appeal.

Scotmid’s Neville Muir, who organised the event, said: “We’ve taken part in the ‘Everest Challenge’ for the last two years because it’s a fun and different way to raise money for our charity of the year. Following the earthquakes in Nepal earlier this year, we decided to do something for those people who have been affected by the devastation.

“As a Co-operative, we take pride in being a community based Society, but we don’t feel this should be restricted to just Scottish communities. We wanted to be able to help those Nepalese communities worst hit by this disaster.”

Neil Mathers, Chair of the DEC Nepal Earthquake Appeal in Scotland, said: “This is an incredibly generous donation for our crucial aid work – and a very apt fundraising challenge for a Nepal appeal! Almost £7m has been raised so far in Scotland and has made a massive contribution to helping DEC members reach well over two million people.

“Although three months on, the disaster may no longer be on nightly news bulletins, it is heartening to see that it is still in people’s hearts and minds as the public continue to rally around to help to rebuild Nepal.”

To find out more about Scotmid’s partnership with Anthony Nolan, visit: www.anthonynolan.org/scotmid.