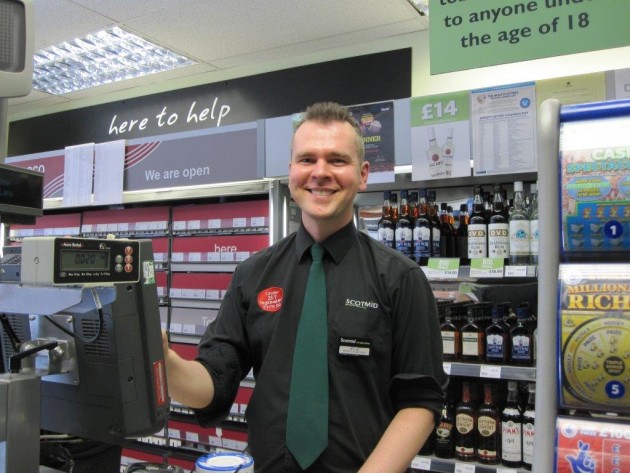 However, despite all his new responsibilities Michal’s favourite part of the job remains interacting with customers. “Customer service is an attitude, not a department,” he says.

Michal Klatka from Scotmid Stockbridge has been announced as the UK’s best co-operative sector sales assistant and is through to the finals of the Sales Assistant of The Year Awards 2015 – the national competition organised by Convenience Store magazine.

The awards are set to take place on Tuesday 10 November at The Dorchester in London and Michal is one of five sales assistants now competing for the overall title of Sales Assistant of The Year.

He’s only been in the job for three years, yet Polish born Michal has already made a tangible impact on customer satisfaction and staff morale in his store, and far beyond.

The last few months have seen him flourish while training staff in his own store and the regions’ other 22 sites in the ‘You are the Scotmid difference’ programme.

The results have been impressive. His own store has swiftly moved up the mystery shopper ranks and is now one of the best performing for customer service in the region, while the number of ‘Wows’ (positive customer feedback forms) that stores receive have risen across the board, with one having grown from zero to 26 in a week.

However, despite all his new responsibilities Michal’s favourite part of the job remains interacting with customers. “Customer service is an attitude, not a department,” he says.

Convenience Store’s editor David Rees commended Michal on his achievement. “Michal blew the judges away with his positivity and exceptional customer service credentials. We look forward to welcoming him to our finals ceremony where the judges will clearly have a very difficult job in deciding which of our winners will gain the prestigious title of Sales Assistant of The Year 2015.”

Michal will be awarded £500 in prize money for reaching the finals and winning her category, and will have the chance to win a further £500 if he is crowned the overall winner.