Scotmid and Forth 1 launch ‘Kid in the Kitchen’ joke book 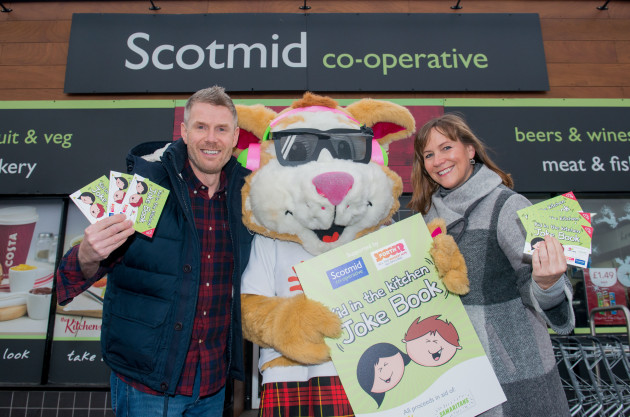 Radio Forth 1 and Scotmid Co-operative have joined forces to bring customers a ‘Kid in the Kitchen’ joke book just in time for Christmas with 100 per cent of proceeds to be split equally between Radio Forth’s Cash for Kids and Samaritans.

The book was launched today by the Scotmid Co-operative Ratho store team and Forth 1’s ‘Boogie in the Morning’ breakfast presenters, Boogie and Arlene, with the help of Cash for Kids mascot, ‘Courage the Cat’.

The first ever ‘Kid in the Kitchen’ joke book features hundreds of jokes, written by children across Edinburgh, the Lothians and Fife, which have aired live on the popular radio feature over the last year. Around 5,000 books are on sale at Scotmid stores for £2.99 each with proceeds raising vital funds for Cash for Kids and Samaritans, the Society’s Charity of the Year.

John Brodie, Chief Executive of Scotmid Co-operative which sponsors the daily ‘Kid in the Kitchen’ segment, said: “Our sponsorship of the Kid in the Kitchen section during Forth 1’s Boogie in the Morning show has not only helped to promote our business but it has proved to be very popular and provided listeners with plenty of laughs over the past year.

“So the natural spin-off is that we have produced the ‘Kid in the Kitchen’ joke books which we will sell in our Scotmid stores and we’re certain they will prove to be equally popular.

“It’s excellent that the humour created by children in the Edinburgh, Lothians and Fife area will help us to raise funds for two great causes – our charity of the year, Samaritans and also Cash for Kids.”

Forth 1’s Boogie added: “The ‘Kid in the Kitchen’ segment is always a highlight of our morning here on the breakfast show, and this book allows us to re-live the very best of 2017’s jokes again and again! We thank Scotmid Co-operative for its continued support, and look forward to presenting the funds raised to both Cash for Kids and Samaritans.”

Scotmid hopes to raise over £300,000 for charity of the year partner, Samaritans, to help keep its doors open and listen to 60,000 more calls from people in crisis. Every six seconds somebody contacts Samaritans for help and 2,000 trained volunteers across Scotland, Ireland and Northern England offer a safe space for people to access support 24 hours a day.

Emma Kemp, Charity Manager at Radio Forth’s Cash for Kids, commented: “Throughout 2017 we’ve been working tirelessly to help children throughout Edinburgh, Fife and the Lothians. All of the donations raised locally go to local causes, so we’re delighted that Scotland Co-operative has offered its support. The joke book will make a great stocking filler and everyone who gets involved can be proud to know that they’ve done their bit to help disadvantaged children at Christmas.”