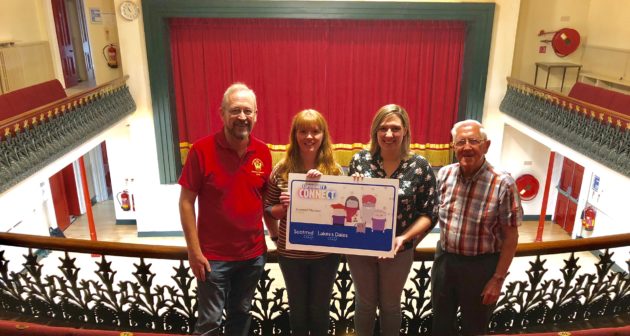 Brechin City Hall Users Group have been shortlisted to become one of the latest recipients of funding from Scotmid Co-operative’s popular Community Connect initiative – potentially being awarded £15,000 in order to help strengthen the service the group provides in the area.

Community Connect was launched in 2017 and enables Scotmid members to award good cause groups in their local area with funding of up to £15,000, generated via the sale of single use carrier bags.

In Scotmid’s North Member Region, Brechin City Hall User are one of three good cause groups, who have been short-listed by a Scotmid member selection panel to receive a financial award. Scotmid members will decide on how the pot of £25,000 is awarded.  The group with the most votes will receive £15,000 and the two runners-up will each receive £5,000.  Scotmid members can cast their votes in store from the 8th – 22nd September or attend the OGM which will be held in Brechin on 1 October.

The other short-listed Good Cause Groups are Highland Hospice and Kincardine and Deeside Befriending.

Three years ago, the Brechin City Hall Users Group (BCHug) took over the running of the local city hall from the local authority. BCHug is run by trustees and a management committee, all of whom have a vested interest in the hall.  The Community Connect Funding is planned to be used towards funding the purchase and installation of a lift to the stage in the hall so that it is accessible for all.

John Brodie, Chief Executive of Scotmid, said: “We are passionate about supporting local causes which are close to the hearts and minds of our members, customers and staff and are thrilled to have such worthy causes nominated to receive our latest round of Community Connect funding. We know how much those who work for these charities go above and beyond every single day for the benefit of their service users and local communities and this should be celebrated.

“We wish Brechin City Hall User’s Group the very best of luck and hope that the community can get behind them and cast their votes so that the funds can go some way towards helping them bring worthwhile projects to life.”

Scotmid members are encouraged to support both charities’ by swiping their Community Connect card after every in-store purchase and then cast their votes for their preferred good cause group either in-store or at Scotmid’s North Region Ordinary General Meeting.

Brechin City Carers’ Chairman Ron Stewart said: “First and foremost, we’re all extremely grateful to Scotmid for being considered for a Community Connect award and we’re really excited about the process.

“The funding we receive will go towards making a significant difference to both our group and to our venue, Brechin City Hall. So now we’re looking to engage positively with Scotmid members in our region and hopefully earn as many votes as possible.”