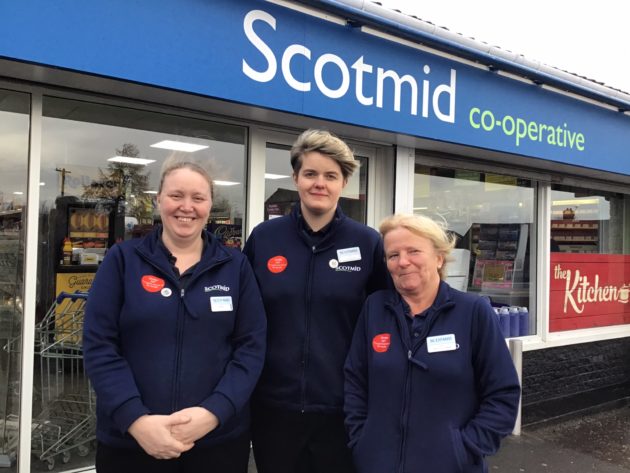 On Christmas Eve, a customer suffered a sudden cardiac arrest at the Scotmid store in Pumpherston, but the quick-thinking and decisive actions of store staff members Vicki Gedik, Carol Keenan and Fiona Maxwell helped to save his life.

Fiona called an ambulance and passed on information to Vicki, who performed CPR on the gentleman, whilst Carol helped to support and comfort him. The ambulance attended within six minutes and took over from the ladies, they worked with him for around an hour and then in the back of the ambulance. Through teamwork and co-operation something incredible was achieved – a HUGE well done to Vicki, Carol and Fiona.

The customer was then transferred to the Edinburgh Royal Infirmary where he has received further treatment and has started to make a full recovery.

The defib was installed in April and was provided by Pumpherston Community Council who had raised funds to purchase the defib in memory of a local man, Eric Clark, who had tragically died of a heart attack three years previously.

All in all, this was an inspirational story and reaffirms the point that the continued diligence of our staff and willingness to go above and beyond makes Scotmid more than a store!