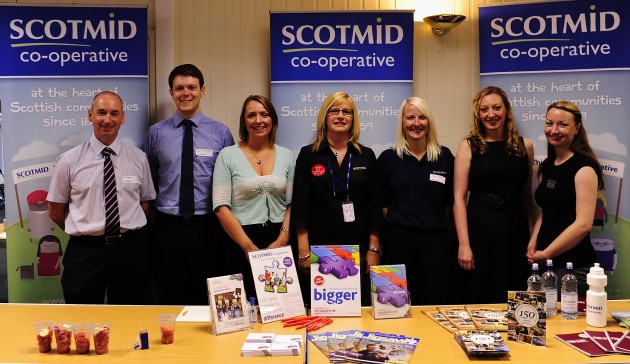 "The Community Alcohol Partnership brings retailers together as part of the solution to prevent underage alcohol sales."

The East Edinburgh Community Alcohol Partnership (CAP) is a campaign to educate the public on the impact alcohol abuse has on our communities. The initiative, which is the first of its kind in Edinburgh, will focus on the Portobello and Piershill areas of the city, following successful trials elsewhere in the UK.

The CAP will see local retailers, Police Scotland, The City of Edinburgh Council, trading standards, schools and youth providers working together to reduce young people’s access to alcohol and improve their understanding of the risks and consequences of underage drinking.

As part of this, Scotmid Co-operative is training independent retailers on responsible retailing initiatives, including the ‘Think 25’ identification policy and proxy purchasing. Scotmid is also supporting community-based diversionary activities for young people.

Ian Lovie, head of licensing and age related sales for Scotmid said: “Scotmid is delighted to be a part of the Edinburgh Community Alcohol Partnership, which brings retailers together as part of the solution to prevent underage alcohol sales. Scotmid is providing training for other retailers on our underage and proxy alcohol policies and has participated in joint patrols with Police Scotland and other CAP partners. The training, which ranges from our ‘Think 25’ underage drinking policy to conflict management solutions, gives smaller retailers the benefit of our experience to stop alcohol from getting into the wrong hands. Scotmid is committed to being a responsible retailer and our stores have achieved the Safer Retailing Award, recognising our strict enforcement of restricted item policies and security initiatives. We’re looking forward to working with all CAP partners to curb underage drinking in the East Edinburgh area.”

The East Edinburgh CAP will also deliver alcohol education seminars to parents and children as well as supporting a range of diversionary activities that promote positive lifestyle choices.

Miles Beale, Chief Executive of Community Alcohol Partnerships said: “I am delighted at the launch of a flagship CAP for Scotland in East Edinburgh. Community Alcohol Partnerships are a tried and tested way of driving down underage drinking and creating better, safer and friendlier neighbourhoods. Locally tailored partnerships, which recognise that retailers and licensees are an important part of the solution, have been shown to be highly effective in driving down harm. Successful CAPs rely on the support of local stakeholders and the support of the East Edinburgh community will be vital.”

Justice Secretary Kenny MacAskill said: “The work of the East Edinburgh CAP will undoubtedly play a huge part in tackling underage drinking and anti-social behaviour and I am delighted that such a wide range of partners are involved. Alcohol misuse is a scourge on communities across the country and costs Scotland £3.6 billion a year as well has having a terrible knock-on effect on families and communities. Initiatives such as this promote responsible behaviour in young people and deter underage drinking which will all ultimately contribute to a safer, stronger and healthier Scotland.”

Superintendent Matt Richards, from Police Scotland Edinburgh Division said: “We are committed to keeping people safe and protecting the young members of our community from harm. To reduce underage drinking, we need to work together with those who sell alcohol to better understand the problems they face and try to deal with them. The knock-on effects of binge drinking to individuals and local communities can be severe and together we can bring about a change in attitudes and behaviour. The East Edinburgh CAP recognises that by working together and with the wider community, including the local youngsters and their parents, everyone can make a difference.”

John Lee from the The Scottish Grocers’ Federation added: “The SGF is delighted to be involved in the East Edinburgh CAP. We believe this is a highly innovative approach to tackling alcohol-related problems in our communities. What makes the CAP approach so effective is that it puts retailers at the heart of the partnership and sees them very much as part of the solution. This is an outstanding opportunity for local retailers to demonstrate their commitment to responsible retailing and their willingness to work proactively with key agencies in the community.

Community Safety Leader, Councillor Cammy Day, said: “Underage drinking can cause serious harm to young people and contribute to anti-social behaviour, which affects the community as a whole. I am very pleased that retailers are taking a pro-active stance by participating in this initiative and responding to the impact that alcohol can have on communities. By working closely with them and with young people, I am confident that the CAP will address this very serious problem and help to create a safer neighbourhood for all local residents to enjoy.”