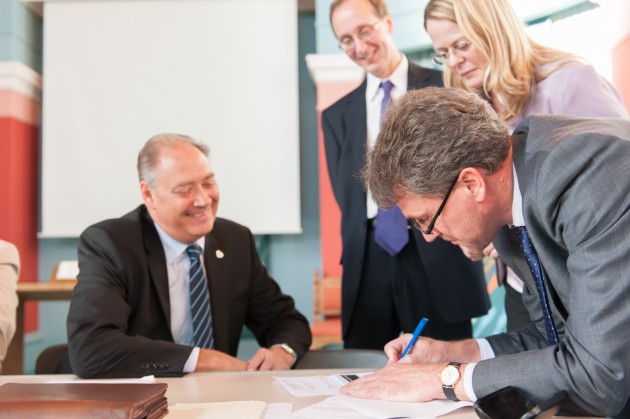 ”This is a momentous decision for both societies."

Scotmid and Penrith Co-operative Societies are delighted to announce that their merger will proceed, after Penrith members voted in favour of the proposal on 28 August 2013 at a meeting of confirmation.

88 members of Penrith Co-operative attended the meeting in the Methodist Church in Wordsworth Street, Penrith, and voted overwhelmingly in support of the proposal to merge the societies, with Scotmid confirming the decision taken on the 13 August 2013. Ralph Beaumont, President of Penrith Co-operative, thanked members for their support over the years for the Penrith society and looked forward to seeing the new enlarged society grow from strength to strength, and is confident that members will see the benefit of the coming together of these two great societies.

John Brodie, Chief Executive Officer of Scotmid Co-operative said ”This is a momentous decision for both societies and one not taken lightly by the Boards of Penrith or Scotmid nor by the members, and together we can look forward, taking the best of both societies to serve the communities and extend co-operation to a wider geographic area.”

Further details about the merger will be made available over the coming months. Scotmid Co-operative is Scotland’s largest independent co-operative society and has been at the heart of local communities since 1859. Scotmid’s latest financial figures (for the year ended 26th January, 2013) showed an operating profit of £6m and a turnover of £428m. The Society employs nearly 5000 staff in 350 retail and service outlets across Scotland, Northern Ireland and the North of England. This includes Scotmid Food, Semichem, The Fragrance House, funeral branches, post offices and a property division. The Society is owned, managed and governed in Scotland and as a co-operative is democratically controlled by its members. Further information on Scotmid can be found at; www.scotmid.coop; www.facebook.com/scotmid and on Twitter @scotmid