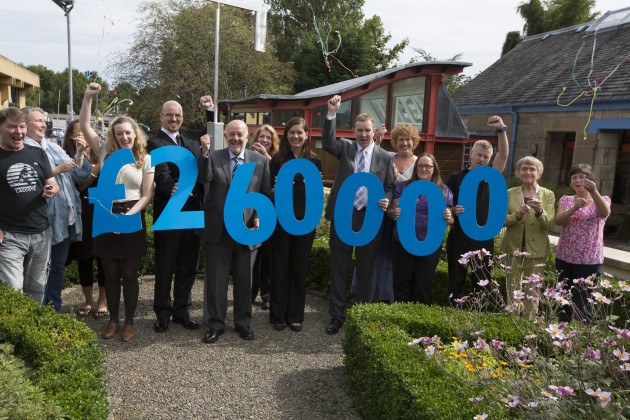 Scotmid celebrates raising over £260,000 for Maggie's.

"The money raised by Scotmid Co-operative is vitally important to Maggie’s, helping us to run our network of cancer support Centres across the UK."

Scotmid Co-operative today (2 September 2013) announced that it has raised over £260,000 for Maggie’s Centres in its charity partnership year. The figure is the most the organisation has ever raised for a charity of the year and is £110,000 over the original fundraising target.

The funds will be used by Maggie’s to offer free emotional, practical and social support to people with cancer and their families and friends in its network of centres across the UK.

Staff have completed a number of inspiring feats to help Maggie’s, including Linda Marshall from Scotmid Coatshill who shaved her head and Brain McCourt from Semichem in Dunoon who endured a sponsored leg waxing. Staff have also skied the height of Mt Everest at SnowZone in Braehead, bungee jumped from the River Garry Bridge in Killiecrankie and abseiled down the Dundee University water tower. Fifteen people from Scotmid completed the gruelling Maggie’s Monster Bike and Hike in May, while seven staff cycled 960 miles from Land’s End to John O’Groats in September 2012.

John Brodie, Chief Executive of Scotmid Co-operative, said: “We are absolutely delighted to have raised more than a quarter of a million pounds for Maggie’s and to have broken our charity fundraising record this year. The enthusiasm and commitment our staff and customers have shown for helping Maggie’s is very inspiring and demonstrates how important and valued their work is. Our team has run, cycled, skied, skydived, abseiled, bungee-jumped and more to raise funds and we are very proud of them for getting behind this terrific charity with such gusto. I’d like to say a huge thank you to all of our store teams and customers for their support.”

Gemma Branney from Maggie’s said: “We have been thrilled to be Scotmid’s charity partner; the staff are fantastic and have not only raised an amazing £260,000 but also given up their free time to volunteer at our Centres and events. The money raised by Scotmid Co-operative is vitally important to Maggie’s, helping us to run our network of cancer support Centres across the UK. Without this support we simply could not do what we do for people living with the impact of cancer. Scotmid are an inspiration to us all, they’ve clearly demonstrated that companies can make a real, lasting, positive difference in their local community!”

Bruce Tasker, Maggie’s Visitor, said: “What a fantastic organisation and employees. They truly deliver when they say they’re going to commit to something. I’m so proud to have met a few staff from the whole organisation that’s gotten behind supporting Maggie’s. I’m so happy that Scotmid have given such a huge amount of money towards supporting people like me now and tomorrow. Sometimes retailers and supermarkets get a bad name…well this is one time when they should get a good name.  In return I’ll be forever a Scotmid customer and supporter.”

Pictured above are Maggie’s visitors, staff and volunteers celebrating the £260,000 fundraising total with Scotmid Co-operative staff from Scotmid, Semichem, The Fragrance House and Scotmid Funerals.