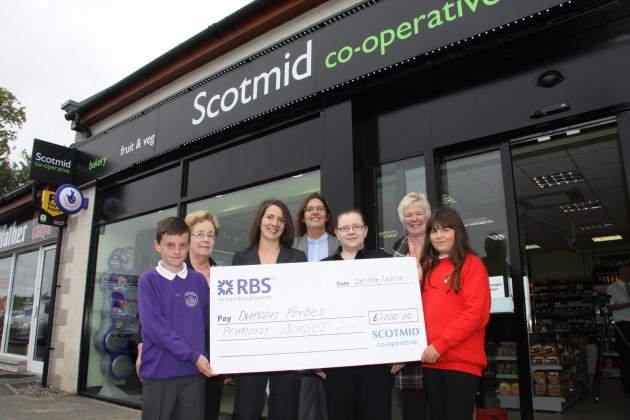 Pupils from Duncan Forbes Primary School and Ginno Conti from Moray Firth Radio opened the new-look Scotmid in Culloden on 20 September 2013, following a complete refurbishment to improve the store for customers.

The store’s re-launch was also a chance for Scotmid Co-operative stores in the area to present the primary school with a donation for £1,000 to fund new books for the pupils. The funds have been raised through the sale of two pence carrier bags in Scotmid stores, with 100% of the profit pledged to local charities.

The new-look store also has a larger range of fresh fruit and vegetables, a bigger chilled section and an extended range of wine and craft beer. The store’s opening hours have been extended to 6am to 10pm, seven days a week.

Vicki Hyslop, Store Manager of Scotmid Culloden said: “We are really happy to present the cheque for £1,000 to Duncan Forbes Primary School to buy new books for the school.”

Vicki added: “The new store looks fantastic. It is much bigger and brighter now and is easier for people to find things. There’s a larger range of fresh produce and a bigger chilled section. I think the store is a lot more open and welcoming too – it’s an all round better shopping experience for our customers.”

Scotmid Culloden is at Unit 1, Woodside Village, Westhill, Inverness, IV2 5FT and is open from 6am to 10pm seven days a week.