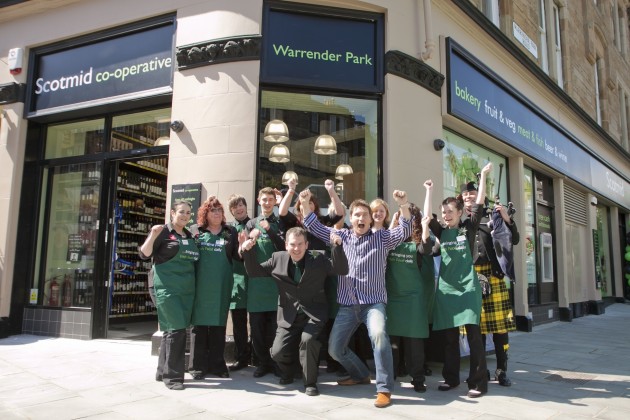 “To be recognised by our industry in this way is fantastic and is testament to the hard work of Store Manager Michael Shiels and his team, and everyone involved in making Scotmid Warrender Park so successful."

The Scotmid Co-operative store, located on Warrender Park Road in the Marchmont area of Edinburgh, received the award in recognition of excellence in all areas of the retail environment. Store Manager Michael Shiels with the SGF Store of the Year award.

Scotmid re-launched the Warrender Park store last year with a new premium design and format to improve the store for local customers. The store was completely revamped to give it a more modern look and feel, with a striking black and green colour scheme, a more spacious layout and new product ranges.

A significant part of the refurbishment was to introduce new customer services to the store, including a new in-store bakery counter from Stephen’s the Bakers. The store also installed a freshly squeezed orange juice maker, a Costa Express coffee machine and a new artisan bread range from The Breadwinner Bakery.

Another key improvement was to increase the size of the fresh fruit and vegetables section and expand the range, which has helped to make Warrender Park Scotmid a destination for fresh produce in the local area. The store now also stocks more products from local suppliers and has larger ranges of meat, fish, wholefoods, fresh flowers, speciality wine and craft beer.

Colin McLean, Chief Operating Officer for Scotmid said: “We are absolutely delighted that our Warrender Park store has been named ‘Store of the Year’ by the Scottish Grocers’ Federation. It’s just over a year since we re-launched Scotmid Warrender Park with our new premium format and the results of the transformation have completely exceeded our expectations.”

He added: “To be recognised by our industry in this way is fantastic and is testament to the hard work of Store Manager Michael Shiels and his team, and everyone involved in making Scotmid Warrender Park so successful. We would like to thank our staff, customers and the SGF for giving Scotmid this honour.”

John Drummond, Chief Executive of the Scottish Grocers’ Federation said: “We believe the SGF Awards will now set the standard for retail excellence throughout the industry. They have clearly shown the extremely high standard of convenience store retailing in Scotland. The winners are leading by example and have set a new benchmark for achievement. We would like to give our warmest congratulations to Scotmid Warrender Park for their outstanding achievement in winning the Store of the Year Award.”

Warrender Park was the first store to pilot Scotmid’s new premium format. The format has been so successful that the retailer has rolled it out to another ten stores, with more in the pipeline.