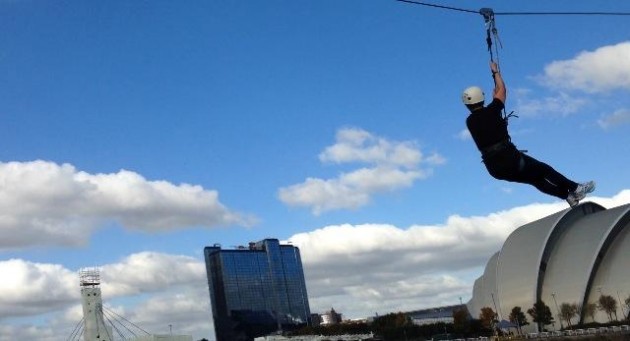 The team zipped across the River Clyde in Glasgow.

Three Scotmid store managers have helped to make a difference in the fight against prostate cancer by zipsliding across the River Clyde in Glasgow on Saturday 12 October. Sharon, Angela and Mo before the zipslide.

The team completed the zip slide challenge for Prostate Cancer UK, Scotmid’s charity partner for 2013/2014, who fight to help more men survive prostate cancer and enjoy a better quality of life. Donations are still coming in, but the team has raised over £600 so far.

Sharon Angus, Store Manager of Scotmid Stevenson said: “There was a fantastic atmosphere on the day with loads of people cheering us on. It’s actually the second time I’ve done the zipslide, but this time the cage was a lot more open so it was a bit more daunting when I was at the top, and once you step off the edge there’s no going back.  I was inspired to sign up because I had an uncle with prostate cancer so the charity has really hit home with me. A lot of people don’t realise how serious prostate cancer can be so anything we can do to raise awareness and get more men talking about it will be well worth it.”

Mo Cook, Store Manager of Scotmid Whitehills said: “I was really nervous beforehand when I realised what I was actually about to do! It was really exhilarating and an incredible adrenalin rush. We’ve got a big target to raise this year for Prostate Cancer UK to beat our charity target from last year. Prostate cancer is the most common cancer in men and yet we still have a long way to go to raising awareness and money. You could say I did it for the boys!”

Angela Watters, Store Manager of Scotmid Kilmarnock said: “The zipslide was absolutely brilliant, it’s the best thing I’ve ever done. I signed up because my partner’s father has got prostate cancer and my uncle has also been diagnosed so it is a cause that is very close to my heart.” Support the team on their Justgiving page at http://www.justgiving.com/R8ZipSlide. Prostate Cancer UK is Scotmid’s new charity partner for 2013/2014. Scotmid’s charity partnership scheme, which began in 2001, has raised more than £1 million for charities since its initiation, including The Princes Trust, RNLI and Marie Curie Cancer Care.