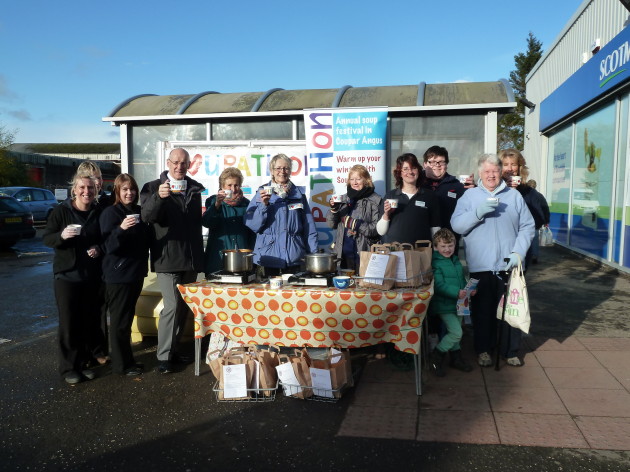 "Scotmid have been very generous once again this year by sponsoring our soup festival."

A soup festival that encourages Perthshire residents to make and enjoy homemade soup has received support from Scotmid for the second year. The Coupar Angus Soupathon runs throughout the month of November, with soup making workshops and cooking lessons for children and families. A key part of the festival is also about raising awareness of how easy and healthy soup is to make.

The festival culminates in a championship to find the region’s best soup, with prizes for the best soup made by a child aged under 13 and the best soup using local ingredients among the accolades that are up for grabs.

Scotmid is supporting the Soupathon by supplying prizes for the championship and the posters and flyers to promote the festival and teach residents how to make soup.

Wendy McCombes, who organised the Soupathon said: “Scotmid have been very generous once again this year by sponsoring our soup festival. This is the second year the Soupathon has been held and we’re hoping it will become an annual event. I‘ve lived in Coupar Angus for a long time and it is a very fertile area with excellent soil for growing vegetables, which are perfect for making soup. I think we are losing traditional cooking skills, so a lot of work we’ve done in the past has been to teach children how to make soup, and this year we’ve tried to widen it to include parents too – some of the kids are very good little cooks! We’ll be holding cooking lessons to teach children and parents just how easy it is to make soup, and how healthy it is, too.”