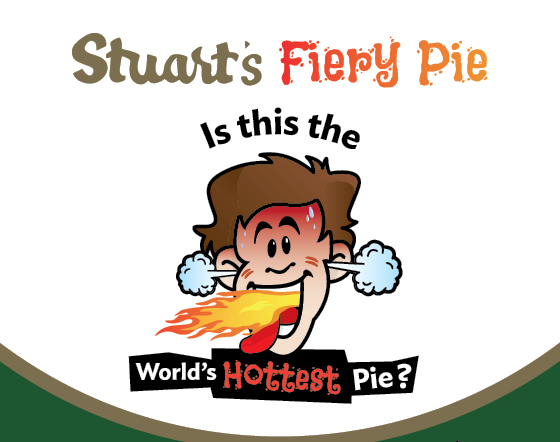 "We’re looking forward to seeing if people can say "aye, I beat the pie!"

Food challenge champions are being invited to try one of the world’s hottest pies, as part of a touring competition coming to selected Scotmid stores in February.

The Stuart’s Fiery Pie, made by award winning Scottish baker Stuart’s of Buckhaven, contains phaal curry, which is the hottest curry available to buy. The pie also contains chopped up mixed chillies giving the pie an extra intense burning quality.

Any participant who manages to eat a whole pie will win a special Stuart’s Fiery Pie t-shirt (subject to availability). The competition will be held at Scotmid’s Warrender Park, Marchmont, Westburn, Pilrig and Gorgie Road branches, which all have Stuart’s of Buckhaven bakery counters in store. The pie-eating competition will also visit Scotmid’s Haggs, Bonnybridge and Bo’Ness stores.

David Hobday from Stuart’s of Buckhaven said: “Stuart’s are delighted to launch this Man vs Food-style challenge with Scotmid and our Scotmid customers. We make this chicken curry pie using our famous pie shell and the hottest curry available, the infamous phaal curry. We also add mixed chillies for that little extra pow! We’re looking forward to seeing if people can say “aye, I beat the pie!”

Stephen Brown, Bakery and Local Sourcing Manager for Scotmid Co-operative said: “We are delighted to be working with Stuart’s of Buckhaven on this exciting food challenge. The Stuart’s Fiery Pie is not for the faint hearted – eating a whole one is going to be a very big undertaking! We hope that lots of aspiring food challengers from Edinburgh and beyond to take on this feat.”

The Stuart’s Fiery Pie competition will be held on the following dates in Edinburgh:

The competition will also be held at:

Stuart’s of Buckhaven is one of Scotmid’s local bakery partners. Scotmid has now set up partnerships with seven Scottish craft bakers, with in-store bakery counters in almost 90 stores. Scotmid has partnerships with Stephen’s the Bakers; Goodfellow & Steven; JG Ross; Aulds; Stuart’s of Buckhaven, The Breadwinner Bakery, and Ashers. The retailer has also partnered with Brysons of Keswick for its new Lakes and Dales Co-operative store in Lazonby, Cumbria. Scotmid’s partnerships with local bakeries are part of the retailer’s commitment to support local suppliers and provide an excellent range of bakery products for customers.