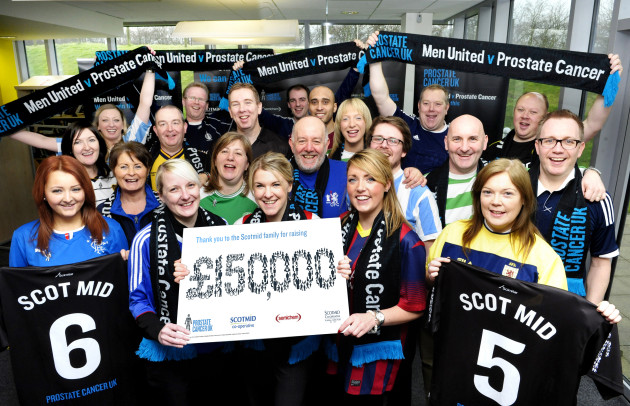 “We have been absolutely blown away by the enthusiasm and generosity of staff, members and customers of our amazing charity partner, Scotmid Co-operative."

Scotmid Co-operative and Prostate Cancer UK have announced that they have achieved their £150,000 fundraising target just six months into their charity partnership year.

News of the record breaking fundraising feat coincides with the launch of Prostate Cancer UK’s new campaign ‘Men United v Prostate Cancer,’ which uses the language of sport to engage men in the fight against the disease. Scotmid Co-operative has signed up as one of the first and most high profile supporters of the campaign.

Staff, members and customers across the Scotmid Co-operative’s 350 outlets – which includes Scotmid, Semichem, Lakes and Dales Co-operative, funeral branches and post offices – are now gearing up to raise as much as possible for Prostate Cancer UK during the remainder of the partnership.

Teams have already taken part in a number of inspiring fundraising challenges including zipsliding across the River Clyde and cycling from Glasgow to Edinburgh, amongst other fitness challenges. Furthermore Karen Grant – Branch Supervisor at Scotmid’s Bishopmills store in Elgin – shaved her head in support of the partnership in October, while over 70 staff grew moustaches as part of the Movember campaign, which provides funds to Prostate Cancer UK. Scotmid has also held a national talent contest for staff, raising nearly £40,000.

£150,000 is the most Scotmid has ever raised for a charity of the year six months into a partnership, and will be used by Prostate Cancer UK to help raise awareness of the disease in communities throughout Scotland.

Fiona Dunlop, Fundraising Manager for Scotland at Prostate Cancer UK, said: “We have been absolutely blown away by the enthusiasm and generosity of staff, members and customers of our amazing charity partner, Scotmid Co-operative. To have achieved our initial annual fundraising target within six months is just incredible. Our Men United campaign is a rallying call for people to come together to beat the common enemy of prostate cancer. With partners like Scotmid on board, we know this is a battle we can and will win.”

Malcolm Brown, Head of Corporate Communications for Scotmid Co-operative said: “We are amazed and very proud to have already achieved our fundraising target for our charity of the year, Prostate Cancer UK. This achievement is testament to the important work that Prostate Cancer UK do to help more men survive prostate cancer and we are so pleased at how our staff, customers and members have shown their support so far. For the news to come on the same day that we have pledged our support for Prostate Cancer UK’s Men United campaign has been an added bonus. We are now hoping to raise over £200,000 during the rest of our charity year.”

Men United v Prostate Cancer is an integrated television, print and digital media campaign, which is running until the end of March. Men – and women – are encouraged to go online to search ‘Men United’ and to get involved by testing their knowledge of the disease with a simple quiz, and signing for the team. They can also pledge their allegiance by proudly wearing the charity’s ‘Man of Men’ pin badge. To sign for Men United visit: www.prostatecanceruk.org/menunited