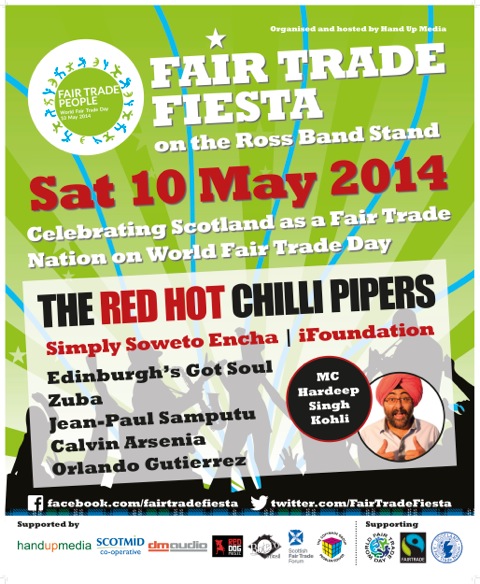 “Scotmid has been a leading supporter of Fair Trade for over 20 years and this fiesta of Fair Trade gives us the opportunity to show our continuing commitment."

The Fiesta begins with a Parade which leaves the City Chambers at 1 pm then progresses down to Princes Street Gardens for a free concert in The Ross Band Stand featuring acts from around the world, headlined by the Red Hot Chilli Pipers and hosted by Fair Trade Ambassador Hardeep Singh Kohli.

The Rt Honourable Donald Wilson, Lord Provost of Edinburgh, will start the Parade on its way from the City Chambers in The Royal Mile.  Over 400 people have already signed up to march in the Parade, including school groups from as far afield as Aberdeen, Glasgow and Ayrshire and college, university and interfaith groups.  Davidson’s Mains Pipe Band whose members are all under 14, will pipe the parade down to Princes Street Gardens and join the headline act, the Red Hot Chilli Pipers on stage to play a number.

Scotland’s International Development Minister, Humza Yousaf MSP will lead the parade and speak during the concert about the importance of Fair Trade and his pride in Scotland’s Fair Trade nation status.  Other speakers include two Ghanaian farmers who will give a firsthand account of Fair Trade working. The event is being organised by Hand Up Media, Scotland’s leading ethical events company and only through sponsoring by Scotmid, Scotland’s co-operative supermarket has this event been able to come to fruition.

Malcolm Brown, Head of Corporate Communications at Scotmid Co-operative said:  “Scotmid has been a leading supporter of Fair Trade for over 20 years and this fiesta of Fair Trade gives us the opportunity to show our continuing commitment. We are delighted to be part of this event and it will be great to celebrate World Fair Trade Day on our home patch in the company of so many like minded people.”

Other acts performing in the concert include Simply Soweto Encha, reggae band coming to this event from Soweto as well a 60 strong choir, Edinburgh Got Soul, The IFoundation & Afro-Celt band Zuba coming from Glasgow to support this Scottish event and local very talented Edinburgh musician Calvin Arsenia who is launching his first album.