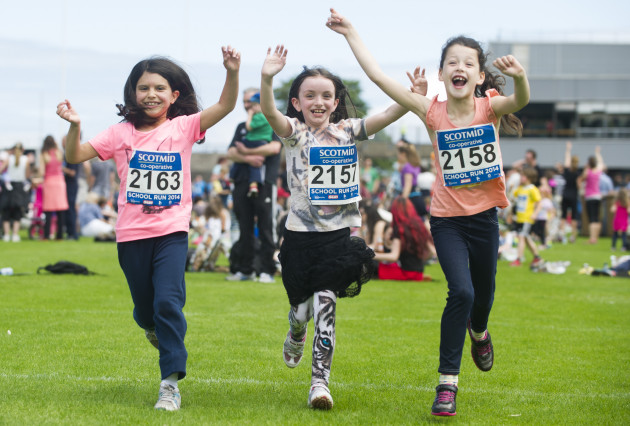 Over 3,500 people took part in the Scotmid School Run.

"Today has brought Edinburgh together to celebrate the historic return of the Queen’s Baton to our city and the upcoming Commonwealth Games in Glasgow."

Event raises £7000 for sport in local schools and clubs

Thousands of school children and families took part in the Scotmid School Run on Saturday 14 June, to celebrate the arrival of the Queen’s Baton Relay in Edinburgh. Former Scottish rugby captain Gavin Hastings and Bronze medal curlers Team Muirhead officially started the event, and over 3,500 school children and their parents ran, jogged and walked 2.2km from the Palace of Holyroodhouse to Meadowbank Stadium. They were joined by Scottish sporting stars past and present, as crowds cheered on the baton into Meadowbank stadium. First Minister Alex Salmond and the Minister for Commonwealth Games and Sport, Shona Robison, both came along to Meadowbank to support the event, where they met the Scotmid team and the many local suppliers in the Scotmid food marquee.

After crossing the finish line at Meadowbank Stadium, children had the chance to try out 15 Commonwealth Games sports. A number of Glasgow 2014 athletes were on hand to help Scotland’s future stars at the ‘Tryathon’, including Commonwealth High jumper Allan Smith, and triple medallist Shooter, Susan Jackson. Families also had the opportunity to sample food from some of Scotland’s finest suppliers in the Scotmid marquee, with treats from Nairns Oatcakes, Cosmo Pizza, Stephen’s the Bakers, Cobbs, Walkers Shortbread, Albert Bartlett, Stoats and Irn Bru on offer. The Scotmid School Run raises money for school sports and is a legacy event, as every penny of the entry fee is reinvested in local school sporting activities and programmes.

Speaking after the event, Tom Gibson, Marketing Manager for Scotmid Co-operative said: “The Scotmid School Run has been a resounding success and we are very proud to have sponsored this inaugural event. Today has brought Edinburgh together to celebrate the historic return of the Queen’s Baton to our city and the upcoming Commonwealth Games in Glasgow. In addition, the Scotmid School Run has raised over £7000 for sports in local schools and clubs, leaving a legacy to develop the sporting stars of our future.”