CHARITY PARTNERSHIP IS A ‘PERFECT MATCH’ 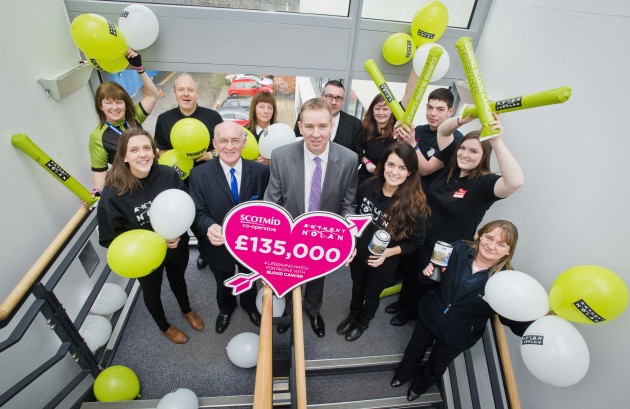 The ‘Scotmid Lifesavers’ are celebrating raising £135,000 for the blood cancer charity Anthony Nolan – just in time for Valentine’s Day.

Scotmid Co-operative has reached the milestone halfway through a year-long partnership with Anthony Nolan and is on target to raise £200,000 for the charity by September 2015.

The company has described the partnership with the lifesaving charity as the ‘perfect match’, and funds raised will help Anthony Nolan to find matching donors for those who desperately need a bone marrow transplant.

It will help patients like Calum Lambert, four, from Livingston, who was diagnosed with Aplastic Anaemia in December 2013 and had a bone marrow transplant facilitated by Anthony Nolan in April 2014. Calum’s mother, Diane Lambert, said: “We will never forget the day we received a call to say that Anthony Nolan had found a match for Calum. From that day forward we could focus on the future and Calum’s recovery.

“It is fantastic that Scotmid are supporting this wonderful charity and it is great to hear that their fundraising efforts have been so successful. Keep up the good work, you’re all superheroes!”

Catherine Miles, Director of Fundraising at Anthony Nolan, added: “We are delighted that the first half of our partnership with Scotmid has been so successful and we are very grateful to the ‘Scotmid Lifesavers’ for raising so much money to help cure blood cancer.

“The money Scotmid raises for us this year will help us save lives by adding 2,000 new potential donors to our bone marrow register from Scotmid’s retail areas – Scotland, North of England and Northern Ireland.

“These will be 2,000 people who could be the only lifesaving match for someone with blood cancer – someone who would otherwise have no other chance to live.”

John Brodie, Chief Executive of Scotmid Co-operative, said: “We are absolutely delighted to have raised £135,000 by the halfway point of our partnership with Anthony Nolan.

“Staff have embraced this very worthwhile cause, holding numerous fundraising events instore while others have been doing something more extreme, such as one of our store managers who is about to climb Mount Kilimanjaro in Africa. Witnessing her efforts makes us more determined than ever to raise as much as possible for Anthony Nolan during the second half of the partnership.

“It’s a huge credit to our staff, members and customers that we are well on our way to breaking our £200,000 target and I’d like to thank each and every one of them for their continued support.”

For more information on our charity partnership with Anthony Nolan, visit http://scotmid.coop/community-and-charity/charitable-support/ .