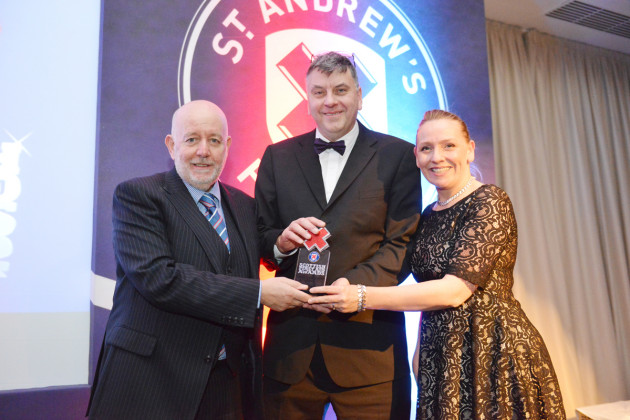 “Scotmid Co-operative are absolutely delighted to have received such a prestigious award – it reaffirms our great association with St Andrew’s First Aid.

The association between Scotland’s largest independent co-operative and St Andrew’s First Aid started in November 2015 when the Society announced they would fund new volunteer uniforms for three years with funds raised from the sale of single use carrier bags.

Over the past year, the funding generated has helped to contribute 307 full uniforms for St Andrew’s First Aid volunteers to use.

“At the awards ceremony, it was inspiring to hear so many stories about how St Andrew’s First Aid makes such a life-changing difference in local communities across Scotland.

“The recognition has been earned through all the hard work from our Membership and Community team and with the support of our store staff.

“We’re proud that our ongoing association with St Andrew’s First Aid continues to go from strength to strength; we share the same ethos and want to help make a difference to people in Scotland.”

Scotmid highlighted their commitment to St Andrew’s First Aid with the news that 15 new bikes and equipment will be donated to the Cycle Patrol team.

This enables St Andrew’s First Aid volunteers to reach people, who could be situated in places that are difficult to reach and who require help urgently.

Brown added: “Scotmid is a co-operative society, who seeks to be at the heart of our communities and we are committed to funding 15 new bikes and all the associated kit to ensure that the Cycle Patrol Team are equipped to get to people who need help quickly.

“Hopefully that donated kit will help to make a difference – we all know that the sooner trained volunteers can get there, the better the outcome is going to be.

“We hope that the new bikes will be operational in the Spring and we look forward to seeing them in action.”

This association is just one charitable cause that Scotmid Co-operative actively supports with the NSPCC’s Childine recently named the society’s new charity of the year.

Since February 2016, Scotmid has awarded over £145,000 to community causes; emboldening the society’s core objective to give something back to the local communities of its members.