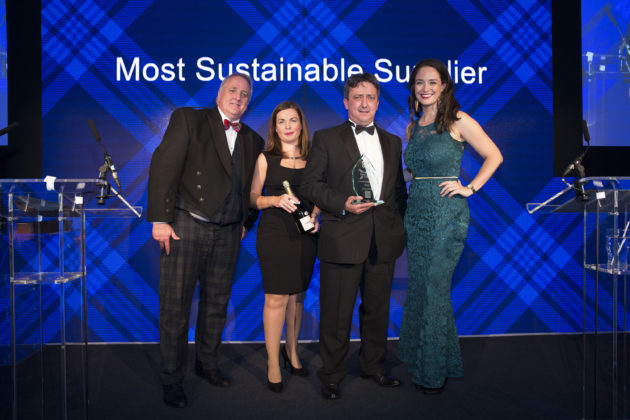 The farmers, manufacturers and suppliers who produce Scotland’s food and drink favourites were celebrated last night (Wednesday 12 September) at the nation’s first ever Co-op Scottish Supplier Awards 2018 in partnership with Scotmid.

The event – which took place during Scottish Food and Drink Fortnight – saw local suppliers line up alongside household name brands to be awarded in categories including Bakery of the Year, Beers, Wines and Spirit Product of the Year, Most Sustainable Supplier and Investor in Scottish Communities.

Big winners on the night included Arbroath’s Angus Soft Fruits, who picked up two gongs – Own Label Supplier of the Year and Fresh Product of the Year for their Ava Rose strawberries.

Rural Economy Secretary, Fergus Ewing said: “My congratulations to these very worthy winners, and to all those who were nominated. It’s great to see Scotland’s amazing natural produce being celebrated in this way during Scottish Food and Drink Fortnight. Our food and drink sector is currently worth around £14 billion per year but, by working with producers and partners in the sector – many of whom are represented at tonight’s awards – we aim to double that by 2030, by ensuring that more people at home and abroad get the chance to enjoy what Scotland has to offer.”

Celebrity chef, Nick Nairn, who led the award’s judging panel back in August, was joined by the ceremony’s host, television star Jennifer Reoch and retail bosses at Glasgow’s Marriot hotel.

Mr Nairn, said: “It makes me extremely proud to see the cream of the Scottish food industry in the room tonight – the sheer standard of produce created within our nation is to be celebrated and whilst the judging process was extremely tricky, it’s fantastic to shine a light on some of the country’s most talented and innovative producers. I’d like to extend my congratulations to all winners – our foodie future looks very bright indeed!”

The Co-op’s John McNeill, commented: “Tonight has been a fantastic celebration of Scotland’s flourishing food and drink industry, which the Co-op is so proud to support. We are thrilled to be able to host our first ever event during Scottish Food and Drink Fortnight – further proof of our commitment to providing our customers and members with the very best choice of high-quality Scottish produce.”

Stephen Brown, Local Sourcing Manager at Scotmid Co-operative, said: “Scotmid would like to extend our congratulations to all of tonight’s winners – as expected, the standard in all of the categories was extremely high and underlines the excellence prevalent in the Scottish Food and Drink Industry.

“The first year of this event has been a success and Scotmid aims to continue being involved because serving and celebrating the best local Scottish produce is something we’re proud to have done for the past 160 years.”

Full list of winners in the Co-op Scottish Supplier Awards in partnership with Scotmid:

The Co-op and Scotmid stock over 1,800 Scottish lines in their stores.