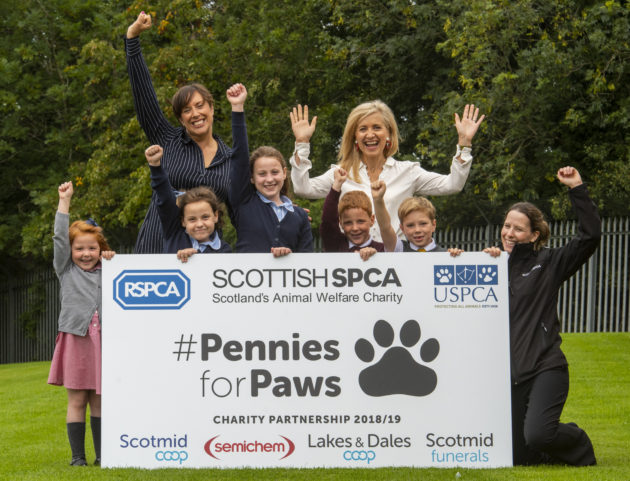 This Scottish Animal Week (3-9 September) Scotmid Co-operative has announced the Scottish SPCA as their 2018/19 Charity of the Year.

The partnership between Scotland’s animal welfare charity and the community retailer aims to not only raise £300,000 but also increase awareness of the vital work the charity carries out in local communities across Scotland, with a particular focus on educating primary schoolchildren and adults on animal welfare.

Kirsteen Campbell, Chief Executive of Scottish SPCA, said: “We are absolutely thrilled to partner with Scotmid and are so thankful for their support.

“The partnership provides endless opportunities to raise awareness of our services, educate people on good animal welfare, encourage support for campaigns and of course raise much needed funds!

“Education and prevention is at the heart of what we do and we are delighted that Scotmid has chosen to support the Society to make sure our message continues to be heard across local communities in Scotland.”

John Brodie, Chief Executive of Scotmid Cooperative, said: “We are really excited to announce our Charity of the Year partnership with the Scottish SPCA.   The target of this year’s partnership will be to raise money to fund an education programme aimed at preventing animal cruelty through education.

“This Charity of the Year partnership is something different to anything we’ve done before, but it is a cause that resonates with our staff, members and customers.

“There are a lot of plans in the pipeline already for fundraising, so we look forward to talking to members and customers about how they can help us to raise as much money as possible for the Scottish SPCA.”

It promises to be another fantastic fundraising campaign at the Society with a series of innovate events; please dig deep and help us to raise #PenniesForPaws Above image caption (left to right): Primary schoolgirl Orlaith Sleight, Scottish SPCA Head of Education and Policy Gilly Mendes Ferreira and Elvis the dog at the launch of Scotmid’s Charity of the Year partnership with the Scottish SPCA.