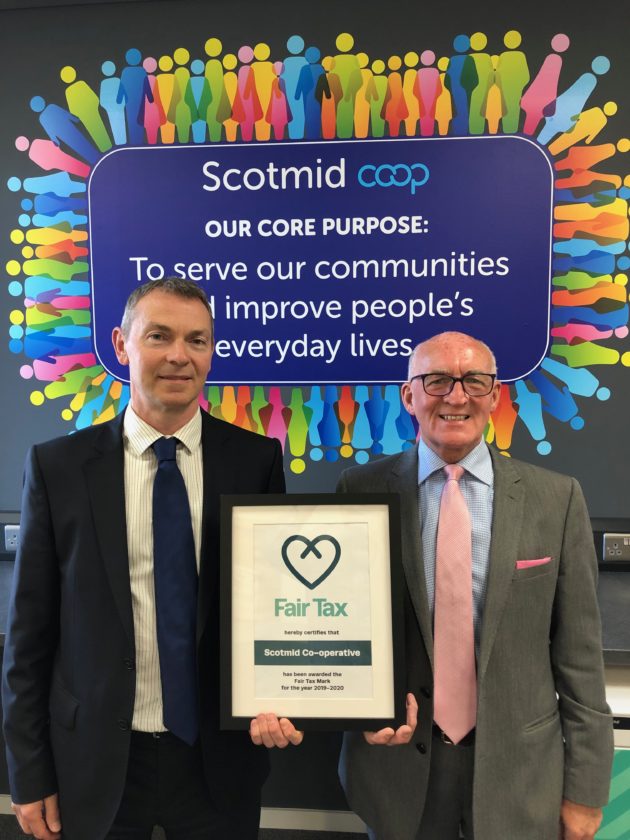 Scotmid have been awarded the Fair Tax Mark for the fourth year in a row and the certificate’s arrival coincides with the launch of Fair Tax Week 2019 which starts tomorrow (6-14 July).

In July 2016, Scotmid became the 21st organisation to be awarded the Fair Tax Mark, the UK’s only certification for businesses behaving responsibly on corporation tax and now around 50 businesses have earned accreditation.

Scotmid have been awarded the certificate for the fourth consecutive year – underlining the Society’s ongoing commitment to the Fair Tax Mark and the fact our Society is fully engaged with responsible tax practice.

Scotmid President Harry Cairney said: “The fact we’ve been awarded the Fair Tax Mark for the fourth consecutive year underlines how seriously we take the certificate.

“We actively support and promote the Fair Tax Mark and we look forward to seeing more businesses in Scotland follow suit in the future.

“Fair tax matches our core purpose as a co-operative, which is to serve our communities and improve people’s everyday lives.

“People understand that a socially responsible approach to paying corporation tax is the most sizeable community investment a business is ever likely to make.”

“Our 2019 polling has shown that not only are consumers across the UK increasingly concerned with organisations paying their fair share of tax, but that consumers in Scotland lead the way – more people in Scotland would choose a business who showed that they were fair tax payers than anywhere else in Britain.

“Having held the Fair Tax Mark for four years, Scotmid are a great example of just such a business, and we’re delighted to be able to accredit them again.”

Consumers looking to support businesses committed to paying their fair share of tax can find the more than 6,500 shops and offices of Fair Tax Mark accredited organisations at https://fairtaxmark.net/accredited-organisations/

Fair Tax Week is a celebration of businesses and organisations that take a responsible approach to tax planning.

In the build-up to Fair Tax Week, both Harry Cairney and John Brodie attended Scottish Parliament to discuss our Society’s continued involvement and about how our members feel passionately about paying tax fairly.