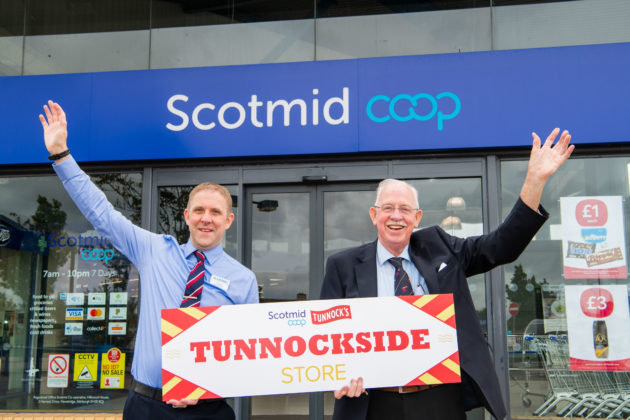 Hot on the heels of receiving his knighthood in the Queen’s Birthday Honours, Sir Boyd Tunnock has received another accolade this week after Scotmid renamed their Tannochside store to ‘Tunnockside’ for 24 hours to celebrate the achievement.

Uddingston-based Tunnock’s, whose factory is situated opposite Scotmid’s Old Mill Road store and two miles from the Tannochside store, has been supplying its famous products, including Caramel Wafers, Snowballs and Teacakes, to Uddingston Co-operative, which merged with Scotmid in 1991, for decades.

The celebrated products have remained a store favourite at Scotmid since being introduced in the 1960s.

The confectionary boss’ knighthood was recognition for his services to business and charity and Scotmid paid him the ultimate tribute to Sir Boyd by renaming their biggest Uddingston store after him for 24 hours.

Campbell Lochie, Scotmid Tannochside’s Store Manager, said: “Tunnock’s is such a big part of Uddingston and the local community we serve.

“I’ve lived in Uddingston for most of my life, so fully understand how important Tunnock’s are in the area and it is great to be able to honour Sir Boyd’s achievement by renaming our store for a day.

“It was fantastic to be able to welcome Sir Boyd to our store to mark the occasion – he is such an inspiration and a great person to speak with.

“Like Tunnock’s, we’re very much a part of the Uddingston landscape and we’re proud to be at the heart of our local community.”

John Brodie, Scotmid Chief Executive, said: “Congratulations to Sir Boyd – his contribution to the food industry has been huge and he thoroughly deserves his knighthood, so as a bit of fun and to mark his honour we renamed our store Tunnockside.

“We are both long established businesses who have traded together for many years. We are proud to be able to serve many of Tunnock’s staff on a daily basis and to stock the products they produce in our stores.”

Sir Boyd Tunnock said: “It was lovely to be recognised by Scotmid with the store being renamed ‘Tunnockside’ for a day. That honour is almost on par with receiving a knighthood!

“On a serious note, it is great to be able to share the good news with the Uddingston community, who have been driving force behind the Tunnock’s story and also with Scotmid, who, when they were St Cuthbert’s, were one of our first big contracts in the 1960s when we delivered to their 50 stores in Edinburgh.”