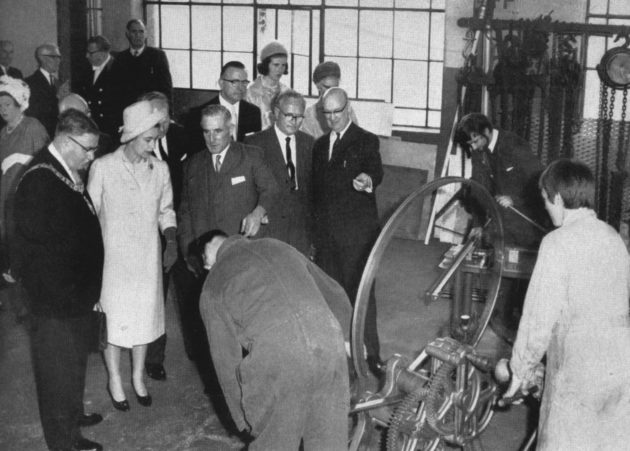 Ahead of our 160-year anniversary celebrations at the start of next week – the doors opened on our first-ever grocery store in Ponton Street, Edinburgh on Friday 4 November 1859 – we revisit a monumental event in our history; the Royal visit of 1966.

In the previous year, the Society’s transport department received the prestigious Royal Warrant (no other co-op had achieved this) for Coach Painting. So on 30 June 1966, the Queen and the Duke of Edinburgh visited St Cuthbert’s transport department, and the Queen was presented with a four-wheeled game wagonette for use at Balmoral. The coach painting and coach hire department at Angle Park closed in December 1994, and the Royal Warrant therefore came to an end.

The visit of Her Majesty reaffirms the fact that our Society’s Transport Department had earned a reputation as the standard bearers for excellence in that trade in the United Kingdom.

Apparently Her Majesty later confided that her trip to Edinburgh was the most enjoyable event she experienced during the summer of 1966!

Special thanks to our former apprentice and long-standing member Hamish Gilchrist, who provided a copy of the commemoration booklet which everyone can now enjoy.