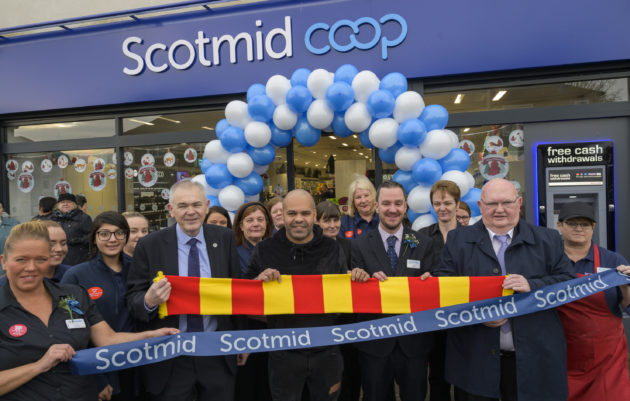 Albion Rovers manager Kevin Harper helped Scotmid to kick off their new store in Coatbridge on Tuesday (26 November) and the convenience retailer says its goal will be to become an asset to the local community.

Taking over the Nisa in Woodside Street, Scotmid, who already have a successful store in Bank Street, have unveiled a new-look shop, which has expanded its range of products by over 400 lines and incorporated takeaway options like burgers and baguettes.

The new store will also have improved and enhanced refrigeration, a Costa Coffee Express machine and a free-to-use ATM.

Community retailer Scotmid has also given timely support to local foodbank charity, the People’s Pantry through the Society’s popular Community Grant programme where small charities can apply for funding of up to £500.

Funding for the People’s Pantry, situated in Bank Street next to the original Scotmid store, was used to purchase shelving units and other additional furniture to help the charity to begin operating in the area.

Scotmid Vice President Jim Watson said: “We’re extremely excited about opening this new store in Coatbridge – our goals are to serve the community and to improve people’s everyday lives in the local area.

“Customers will be at the heart of our store, which has a vastly expanded range of produce available, a free-to-use ATM and new Food-to-Go including burgers and baguettes – all in all, we will be providing a new and improved shopping experience for our members and customers.”

The new Scotmid store is situated two miles from Cliftonhill Stadium – home of SPFL League Two team, Albion Rovers for the past 100 years – and the club’s manager Kevin Harper believes the store will be a positive addition to the area.

Albion Rovers manager Kevin Harper said: “It is great to be a part of today’s opening ceremony in Coatbridge – like Rovers, Scotmid are right at the heart of the local community and I’m sure the new store will be a huge success.” Scotmid Board Member Andy Simm helped Vice President Jim Watson to cut the ribbon to mark the official opening with hundreds of customers queuing up to get an early glimpse of the new-look store while receiving goody bags containing groceries.