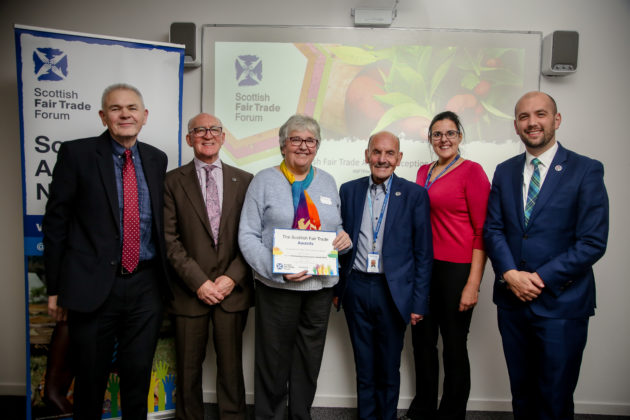 The Scottish Fair Trade Awards recognise the individuals, groups and organisations working locally to support and promote Fair Trade, and thereby make a tangible difference to the lives of producers who grow our food and make the products that we eat and use every day.

Scotmid’s head office was a fitting venue for this year’s event. With a core purpose of serving local communities and improving people’s everyday lives, Scotmid opened its first-ever grocery store in Edinburgh exactly 160 years ago this month, and has been a champion of the Fairtrade movement since its inception.

Scotmid was one of the first Scottish retailers to stock Fairtrade products when the Fairtrade Mark was introduced in 1994 and continues to support Fairtrade communities groups and Fairtrade activities in schools across Scotland today.

Harry Cairney, Scotmid President, said: “We were privileged to be able to host this event and it was great to be able to celebrate the success of the Fairtrade movement.

“Fairtrade shares Scotmid’s values and principles – for the past 160 years, we’ve operated ethically.  Naturally our friendship has grown and over the past 15 years and through co-operation we have helped to spread the word about the importance of Fairtrade products to all – from primary schoolchildren to pensioners – in our trading areas while also stocking the products in our stores.

“Edinburgh has held Fairtrade City status since 2004 and, over the past 15 years, we have provided support and sponsorship for Fairtrade Festivals that have been staged across the city – engaging positively with Edinburgh’s population about an incredibly important subject.

“There is no debate about the benefits which Fairtrade brings to all and it’s great to see the increasing number of people and businesses who can see the longer-term rewards of buying into what Fairtrade is all about. Essentially it is about working together and co-operation and you can’t say fairer than that.”

Martin Rhodes, Chief Executive of the Scottish Fair Trade Forum said: “This is significant year in the Fair Trade movement with the Fairtrade Mark turning 25 and a number of other dedicated Fair Trade businesses such as Traidcraft and Paisley-based business JTS also celebrating major birthdays.

We would not have been able to reach these milestones without the work done by the awardees and other passionate campaigners who dedicate their time to raising awareness of the Fair Trade cause.”

The need for action against climate change emerged as a theme of the evening with many of the awardees praised for their work in positioning Fair Trade as part of the solution to climate change, and promoting activities that showed Fair Trade campaigning and climate action going hand in hand.

The Scottish Fair Trade Forum also collaborated with Ayrshire-based energy efficiency advisors, the Energy Agency, to be able to present this year’s Innovation and Sustainability Award.

“I am delighted to attend this event and formally recognise those who go out of their way to promote Fair Trade and global citizenship in their communities. Congratulations to all the award winners.”

Innovation and Sustainability Award 2019: City of Glasgow College Jewellery Department for taking such a proactive and energised approach to embedding Fair Trade as part of sustainability into their curriculum, and working  with a range of external partners to do so.

Volunteer of the Year 2019: Karena Jarvie of the Perth and Kinross Fair Trade group for her outstanding commitment to Fair Trade, as an advocate, campaigner, educator and Traidcrafter – for over 30 years.

Community Award 2019: Farlogie Café run by pupils of Carlogie Primary School for running a thriving Fair Trade community café in Carnoustie that has become a hub for Fair Trade products and information in the town.

Campaign of the Year 2019: This group of teachers who have embraced Fairtrade cotton uniforms, and by doing so, are playing their part in leading the “Fairtrade school uniform” revolution in Scotland.

Outstanding Achievement 2019: Carol Clarke of Hamilton Fairtrade Town for her consistent outstanding commitment to Fair Trade in both a personal and professional capacity.

Special Recognition Award 2019: JTS for their significant achievements in so many aspects of Fair Trade campaigning, retailing and support for producers, and in special recognition of these achievements in their 10th year.