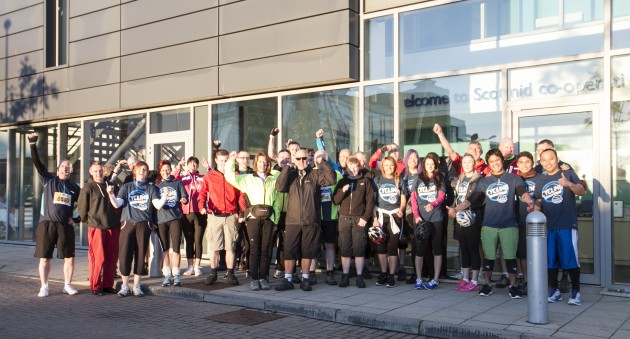 The Scotmid team before the start of Pedal for Scotland.

"Pedal for Scotland is a great event that brings thousands of people from Scotland together."

A team of nearly 40 from Scotmid Co-operative Society saddled up for Pedal for Scotland on Sunday 8 September. The cross-country cycling challenge, which is Scotland’s largest mass participation bike ride, saw more than 8,000 people pedal from Glasgow to Edinburgh.

Scotmid is one of the key sponsors of the event and ran the rest stop at Kirkliston, which is the last stop before the finish line at Murrayfield Stadium. Scotmid’s volunteers were on hand to provide free tea, coffee, bananas and snacks to cyclists, while the Preston Lodge High School Pipe Band performed at the event. Scotmid recently awarded sponsorship to the band to help fund new uniforms and equipment. Malcolm Brown, Head of Corporate Communications for Scotmid said: “Scotmid were delighted to once again sponsor Pedal for Scotland and we were thrilled to be able to enter a team of nearly 40 people this year. Pedal for Scotland is a great event that brings thousands of people from Scotland together and promotes cycling at the same time, and the atmosphere on the day was excellent. We are very proud of our team for taking part and we would like to thank our volunteers for helping out at our Kirkliston rest stop.”

The team have raised nearly £2,000 so far for Prostate Cancer UK, the Society’s new charity partner and can be sponsored on their Justgiving page.