Scotmid to sponsor The School Run 2014 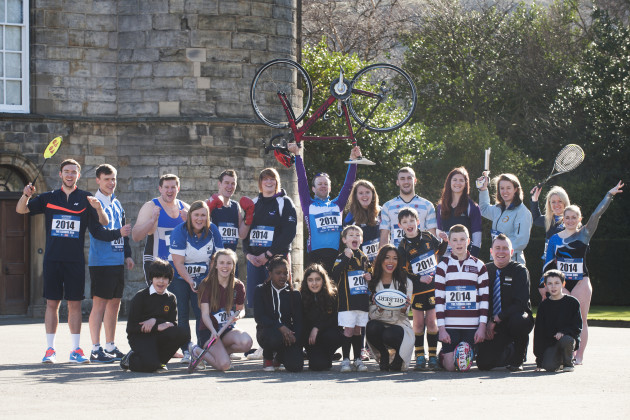 "We are delighted to be sponsoring The School Run and Tryathon and we look forward to celebrating what is set to be a fantastic year for sport in Scotland.”

Scottish athletes, school children and rising sports stars from across Edinburgh took to the Palace of Holyroodhouse today in their sporting gear in preparation for the Scotmid-sponsored School Run and Tryathon, being held on Saturday 14 June 2014 by the City of Edinburgh Council. The event will take place on the same day as the city welcomes the Queen’s Baton Relay.

The Scotmid School Run, which will span a 2.2km route from Holyrood Palace to Meadowbank Stadium, will allow participants of all ages and abilities to run, jog or walk side by side with sporting stars in order to raise money for community and school sports facilities.

At Meadowbank Stadium, a ‘Tryathon’ will take place with the opportunity for budding stars to try their hand at 15 sports under the guidance of sporting greats who will be on hand to provide tips and encouragement. Participants will be able to collect a stamp for every sport tried in a Passport, and once ‘trained’, will qualify for the Challenge – a sporting obstacle course putting the various sporting skills learnt to the test.

The Tryathon, which is part of the Games for Scotland legacy programme, is designed to inspire, develop and support a range of events throughout the country. Councillor Steve Cardownie, Festivals and Events Champion, City of Edinburgh Council, said: “The School Run is going to be a standout event for families up and down the country to play their part in the historic return of the Queens Baton to Edinburgh. Signalling the start of the Commonwealth excitement, what better way for the City to welcome in the Games than by offering locals the chance to try their hand at 15 Commonwealth Games sports at the Tryathon where they can also meet a host of their favourite sporting stars. With such a rich Commonwealth heritage and having hosted the Games twice before, it is fitting that the baton’s first port of call should be here in Scotland’s Capital City.”

Malcolm Brown, Head of Corporate Communications, Scotmid Co-operative said: “At Scotmid, we are proud to invest in sports initiatives across Scotland, to support healthier and more active lifestyles in our local communities. The School Run and Tryathon is a terrific opportunity for children and their families to get more active, support their local school, and try out some of the Commonwealth Games events that our sporting heroes will be taking on in Glasgow 2014. We are delighted to be sponsoring The School Run and Tryathon and we look forward to celebrating what is set to be a fantastic year for sport in Scotland.”

Gavin Hastings, former Scotland Rugby Union player, said:“The School Run and Tryathon celebration is going a fantastic day out for the family, running from morning till night, and will give Edinburgh residents of all ages the opportunity to show their support for Glasgow 2014. I’m looking forward to seeing budding sports stars try their hand at the many different sports on offer.”