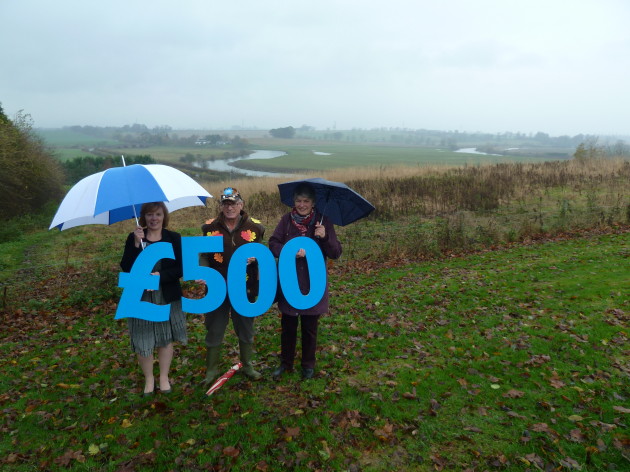 A project to develop an area of woodland as a unique educational, leisure and environmental amenity for the Coupar Angus community has received a kick-start from the Scotmid Community Grant fund.

The Coupar Angus Community Woodland project, which is formally constituted under Forward Coupar Angus, has been founded to develop the town’s Butterybank field, next to the cemetery.  Up until five years ago the field was used as grazing but has since fallen into disuse.

The proposed woodland, which is still in planning stages, will include a path network within indigenous shrubs and trees.  The project has a proposed budget of £8,000.  The grant of £500 from Scotmid’s North Regional Committee is the first donation to assist in getting the project off the ground.

Coupar Angus Community Woodland Convenor, Rev Dr Iain Bentley said, “The proposed woodland will provide an amenity leisure facility on a previously abandoned site which will bring immediate environmental improvement to the area.  The grant from Scotmid will allow us to start the project off.  Things like site clearance, fencing and gates are all essential before we can look at the bigger things like the 1500 trees and shrubs that will be planted to create a beautiful woodland area to be enjoyed by the whole community.”

Scotmid’s North Regional Committee is made up of nine, elected Scotmid members.  The committee meets regularly to consider grant applications from community groups, charities and non-profit organisations from Perth to the Northern Isles.

Committee Member, Sheila Downie commented, “The Scotmid community grant exists to give a little boost to community groups and assists them in reaching their full potential.  It’s a pleasure to be able to support Forward Coupar Angus with their community woodland project, especially when they are meeting such a unique need.  I wish the committee all the very best with their future endeavours and as a Coupar Angus resident, I look forward to seeing the project develop over the coming years.”