The store, which also won the Best Multiple Store for the third consecutive year and Best Customer Service awards, beat off competition from across the UK to claim the prize in London on Thursday 19 March 2015. 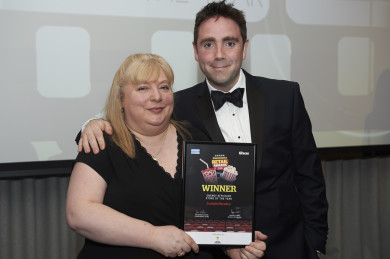 Scotmid’s Moredun store was awarded the Energy Efficient Store of the Year award, its second national award win in the same week, following its success in the Sustainable Retailer of the Year category at the Scottish Grocer Awards on Thursday 12 March 2015.

Stockbridge store manager Craig McAulay said: “I’m absolutely gobsmacked. It’s a great achievement for the store, myself and Scotmid as a whole and I think it’s been a big team effort right throughout the whole year. I think we won because we’re trying to give something different to the customers, and we’ve given them what they asked for, such as an artisan local bakery.

“Hopefully we’ll get stronger and stronger and develop year on year. There’s a lot of competition in Edinburgh city centre and it gets harder and harder each year, but we’ve got a good focus and we’re going in the right direction.”

Kevin Plant, Operations Director for Scotmid, said: “Stockbridge is the latest offering of our premium black format, which combines smart design with an upmarket range and strong focus on delicious local produce. We’re delighted that the store has been recognised for its consistently high standards and its commitment to local suppliers and the community.”

Colin McLean, Chief Operating Officer for Scotmid, said: “These important industry awards highlight just how committed our staff are to providing customers with the best shopping experience we can give them – although it’s not just down to the hard work of our staff and managers; there is a whole team working behind the scenes to drive Scotmid co-operative forward, to make our stores some of the very best in the UK to shop in, while exploring and employing the most innovative approaches we can to make our business as environmentally friendly as possible.”