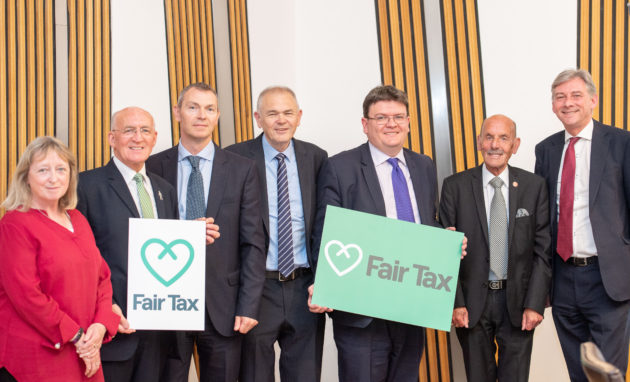 Scotmid President Harry Cairney gave a speech at Scottish Parliament to MSPs earlier this week – highlighting the Society’s support of the Fair Tax Mark and encouraging other Scottish businesses to follow suit as part of Fair Tax Fortnight.

The Fair Tax Mark is an accreditation scheme growing in demand as businesses recognise the benefit of being able to demonstrate their commitment to fair tax practices.

In July 2016, Scotmid became the 21st organisation to be awarded the Fair Tax Mark, the UK’s only certification for businesses behaving responsibly on corporation tax and the certificate was awarded again in September 2017 – underlining the Society’s ongoing commitment.

Scotmid President Harry Cairney said: “We actively support and promote the Fair Tax Mark and we look forward to seeing more businesses in Scotland follow suit in the future.

“Fair tax matches our core purpose as a co-operative, which is to serve our communities and improve people’s everyday lives.

“People understand that a socially responsible approach to paying corporation tax is the most sizeable community investment a business is ever likely to make.”

Paul Monaghan, Chief Executive, Fair Tax Mark said: “Our research has found that Scots, more than any other part of the UK, want to see the UK Government intervene much more robustly to encourage responsible tax planning by business.

“In particular, they are keen to see radical change in the area of tax reporting and auditing, and they want to see public procurement take much more account of responsible tax planning. The Scottish public have a strong preference to shop with, work in and celebrate fair tax enterprises.”

“The figures released today demonstrate that the people of Scotland recognise that companies should pay their way.  Organisations should be proud to pay the correct level of tax in the correct jurisdiction.

“I am calling on the UK and Scottish Governments to look at ways of using the Fair Tax Mark in procurement to ensure that no public funds go to organisations which are tax avoiders.  I know that colleagues in local government will also be looking for ways to ensure that local government contracts only go to organisations which do their patriotic duty and pay their taxes.”

Consumers looking to support businesses committed to paying their fair share of tax can find the more than 6,500 shops and offices of Fair Tax Mark accredited organisations at www.fairtaxmark.net/map

Fair Tax Fortnight, 9-24th June, is a celebration of businesses and organisations that take a responsible approach to tax planning. The Fortnight will be a marked by events across the UK, and include round-table discussions, coffee mornings, film screenings and a series of further accreditation announcements.